Norma graduated from Archer Consolidated High School in Archer, Iowa in 1942 and later graduated from Iowa State University in Ames, with a BS degree in Dietetics in 1946. She married George Firkins on June 16, 1946. Norma had a lifelong interest in music and often accompanied high school students with their instrumental solos. For nearly 50 years she was the church organist for five different churches while they lived in Iowa and Illinois. In 1972, Norma began oil and watercolor painting and later taught oil painting. She also enjoyed being a homemaker, bird watching and she always had a beautiful flower garden. She even won several awards for both her flowers and her oil paintings.

She was preceded in death by her parents, her husband, a son, Randall Firkins, a sister, Carol and a brother, Donald.

The Bratley Funeral Home in Washburn, WI is assisting the family with arrangements. In lieu of flowers, memorials may be made to the Zion Lutheran Church in Alta Vista, IA or to your local food pantry.

To view this obituary online, sign the guestbook or express online condolences, visit us at www.bratleyfamilyfuneralhomes.com.

There will be a funeral service on Thursday, November 1, at 10:00am, at the American Reformed Church in Orange City. The Rev. Donald Lenderink and the Rev. Jonathan Opgenorth will officiate. Interment will follow at the West Lawn Cemetery in Orange City.

Visitation will be after 4:00pm on Wednesday, with the family present from 5:00pm to 7:00pm, at the Oolman Funeral Home in Orange City.

Thelma graduated from Sheldon High School in 1945. She was united in marriage to Garth Madsen on July 22, 1946, in Sioux Falls, South Dakota. Garth passed away on November 1, 2005.

Thelma worked for Northwestern Bell for many years as a facility maintenance manager, managing all of Southwest Iowa, before retiring in 1986. She was a member of the Okoboji Women=s Club and First Lutheran Church in West Okoboji. Thelma enjoyed spending her spare time gardening, quilting, traveling and her coffee groups. She truly loved her time with her family!

A memorial service will be held at 11:00A.M. Saturday, November 3, 2012, at First Lutheran Church in West Okoboji. Visitation will be held Friday, from 4:00P.M. until 6:00P.M. at the Schuchert Funeral Home. Burial will be at Lakeview Gardens Cemetery.

The Schuchert Funeral Home is in charge of the arrangements.

Visitation will be Friday, November 2, 2012, with the family present from 6:30 to 8:00 P.M. at the Andringa Funeral Home Sheldon Funeral Service in Sheldon.

There will not be a Memorial Service. Private burial will be at a later date.

The Andringa Funeral Home Sheldon Funeral Service of Sheldon in charge of arrangements for Raymond Chick.

Friends are welcome to visit at the home in Matlock. (580 Matlock Blvd.)

Raymond Jesse Chick was born on July 22, 1923 in Moberly, Missouri. He was the son of Edward Thomas and Neola Mae (Newton) Chick. He lived his youth in Columbia, Missouri, where he attended school and graduated from high school.
He married Elsie LaFern Perkins of Columbia, Missouri, on April 18, 1941 in Columbia. He later married Helen. After Helen died he remarried Elsie, whose spouse had also died.
Raymond served in the United States Coast Guard, for two years, attaining the rank of Apprentice Seaman, during World War II. He was honorably discharged. He then was employed by a civilian contractor who contracted with the government. Raymond traveled the United States working with the government and worked at the Nevada test sights, where they prepared the ground for explosions. He retired and enjoyed hunting, fishing, traveling the United States and gardening vegetables and flowers. Raymond liked to keep busy tinkering with engines and mechanical things. He also liked to work with wood. Raymond loved animals and rescued dogs, cats, etc. He was also known as a card shark and did a good job playing and memorizing cards. He was a Denver Broncos Fan.
Raymond was a former member of the VFW and American Legion of Boyden, Iowa. He was a City Council Member of Matlock, Iowa.
Raymond was a colorful person and lived his life accordingly.
He passed away on Saturday, October 27, 2012 at his home in Matlock, Iowa.
Those left to cherish his memories are his children: Alice Marie Pitcher of Sterling, CO, Mary Lee and husband Robert King of Branchville, NJ, Rayma Ann Jenkins of Macon, MO, Leona Mae Johnson of Matlock, IA, Raymond Ross Chick of Rock Rapids, IA, Michael Glenn and wife Lisa Mierchie of Sheldon, IA, Charles Raymond and wife Peggy Mierchie of Fairmont, CA; 30 grandchildren; 54 great grandchildren; 3 great-great-grandchildren.
He was preceded in death by his parents, wife, Elsie and wife, Helen, four brothers and two sisters.

Visitation with the family present will be on Sunday,  from 2:30pm to 4:30pm, at the church. Arrangements are with the Oolman Funeral Home in Hospers. 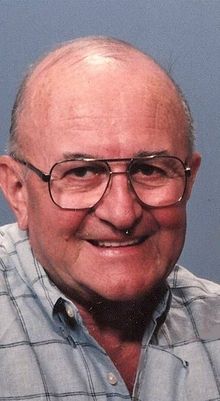 There will not be a Funeral Service or Burial at this time.

Online Expressions of Sympathy can be sent to www.andringafuneralhome.com The Andringa Funeral Home of Sibley in charge of arrangements for Robert Beving.