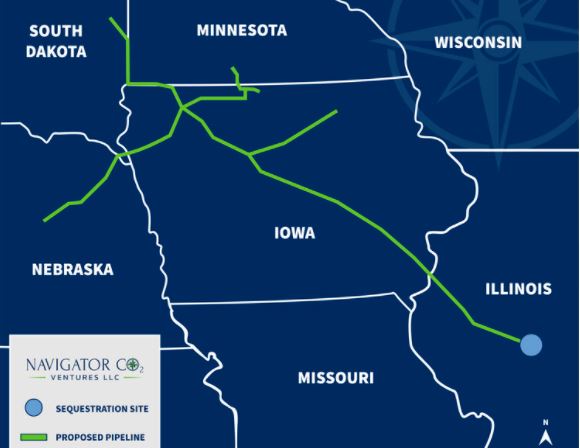 IARN — Midwest-based Navigator CO2 Ventures has entered into contracts with three industry-leading companies to utilize their respective expertise in advancing the execution of its Heartland Greenway CO2 Pipeline Transportation and Sequestration System Project.

Matt Vining is CEO of Navigator CO2 Ventures. He says his company is partnering with Tenaska, Advanced Resources International (ARI), and Chabina Energy Partners for the project.

“What we have is this unique combination where we have the benefit of Tenaska’s engineering, they’ve already engineered this facility once and now we’re just rescaling,” Vining said. “Paired with the leading subsurface team (ARI) for classic injection permits specific to Illinois. So we feel like we got the dream team of service providers that’ll help de-risk our path forward.”

Based on extensive feedback from potential customers representing diverse emissions sources, and in an effort to provide a holistic solution for multiple industries, Navigator is actively looking to expand the capacity of the pipeline and proceed with multiple sequestration sites, creating an injection capacity of up to 12 million metric tonnes per year.

Before construction begins, Vining says one complication is how the company will acquire building permits.

“CO2 pipelines don’t have federal citing permits, so they defer to the states,” Vining said. “With the current footprint of the project being primarily across the state of Iowa, but to a lesser degree in Nebraska, Minnesota, South Dakota, and ultimately the central sequestration site in Illinois, we have to complete the pipeline permitting process five times.”

Vining says that process could take anywhere from 10 to 18 months. He added construction of the pipeline would likely take another 20 months with the project hopefully being in full gear by the fourth quarter of 2024, and into the early stages of 2025.