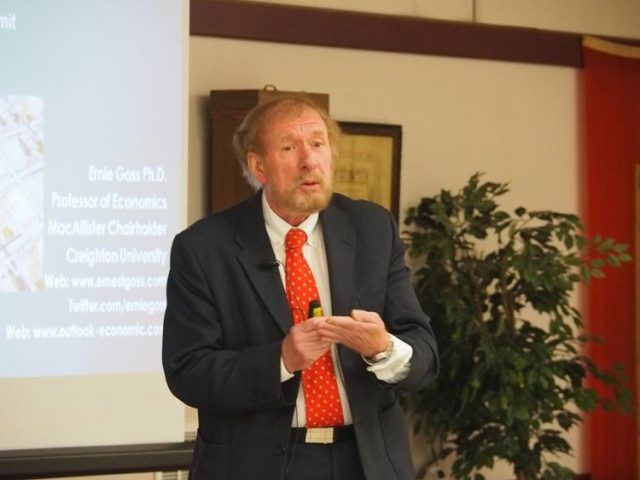 The Creighton University Rural Mainstreet Index – or RMI – stayed above growth neutral for the eight month in a row during July. The overall index for July fell to a healthy 65.6 from June’s 70.0. Dr. Ernie Goss conducts a monthly survey of bank CEOs in a 10-state region, including Iowa. He says while the number fell slightly, things are still in solid shape.

“The overall index for the month of July was down from last month, and last month was down from the previous month, so things are cooling down a little bit, but still in a healthy range,” said Goss. “We’re seeing the rural main street economy doing much better, with healthy growth. We’re seeing exports driving that, we’ve got good solid grain prices, and we’ve also seen a lot of livestock prices doing better.”

Lower grain prices are likely why the index has dropped a bit in the last couple of months. Overall, Goss says the ag economy is still in good shape.

“We’re seeing some of the best numbers in terms of agricultural income and prices since 2012 and 13, and that’s spilling over, for example, into farm equipment sales,” said Goss. “Farmers are once again purchasing equipment. We asked the bankers about farmland prices growth over the previous 12 months, and their estimate was about 5.8% growth over the last 12 months. We then asked him about the next 12 months, to project that, and it was much less at 2.4%, so, less than half of growth in farmland prices ahead as what we saw behind.”

Goss says bank CEOs are starting to express concerns about the future of the ag economy over the next year. A couple of the major concerns include drought and government regulation.

“We asked the bank CEOs to look at six to 12 months, and they were less optimistic about the future,” said Goss. “But some of that could be what are the potential Black Swans, or events that are low risk and high cost. Saber rattling with China; of course, anything there spills over into the Rural Mainstreet economy because exports are so important, and exports to China particularly important, whether we’re talking about pork, corn, especially soybeans; that has some significant impacts on the region.”