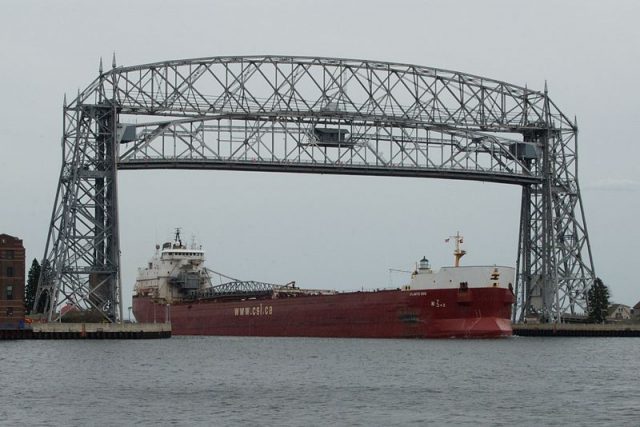 IARN — The Great Lakes Seaway Partnership today announced the tonnage report for traffic through the St. Lawrence Seaway through July, showing a continuation to a steady 2022 shipping season.

“As the season progresses, the Great Lakes-St. Lawrence Seaway System continues to provide shippers a reliable route for a diverse range of commodities flowing in and out of the U.S. heartland,” said Craig H. Middlebrook, Deputy Administrator, Great Lakes St. Lawrence Seaway Development Corporation. “Cargo numbers continue to improve thanks to the dedicated workers at our ports and on the vessels who are keeping essential products like grain and steel moving efficiently through the Seaway’s maritime supply chain.”

Between the start of the shipping season and the end of July, the Seaway System moved 514,000 tonnes of grain, marking a nearly 37 percent increase compared to the same period in 2021. This increase highlights the ongoing demand for U.S. grain shipments in response to food shortages caused by the conflict in Ukraine.

It’s estimated that U.S. Great Lakes ports traded with at least 27 countries during the month of July, up from 26 in June.

Below is a breakdown of the key performance indicators and commodity trackers comparing tonnage numbers through July 2022 to the same period of 2021.

Throughout the 2022 season, the Port of Oswego is keeping pace with the tonnage and activity of the larger ports on the Great Lakes – providing a notable uplift to the local economy. The port has been purchasing more diesel, forklifts, gas, hardware and other equipment, creating positive downstream economic benefits. In July, the Port of Oswego’s docks received two shipments of aluminum and two shipments of wind energy equipment.

“We’re seeing the results of a surge in maritime business that once was the hallmark of Oswego. Our continuing investments of over $26 million include upgrades to our facilities to make the port once again a leader on the lakes,” said William W. Scriber, executive director of the Port of Oswego. “We’re particularly proud that our revenue not only supports our operations, but also supports local jobs and businesses without relying on tax dollars.”

July was another positive month for the Port of Toledo as tonnage exceeded the previous year by nearly 20 percent, reaching nearly six million tons. Grain, iron ore, coal, general cargo, and dry bulk were all trending upward going into the second half of the shipping season.

“It is really amazing the impact that the Cleveland Cliffs DRI plant has had on the Port of Toledo in terms of tonnage, job creation, and infrastructure development,” said Joseph Cappel, VP of Business Development for the Toledo-Lucas County Port Authority. “We are also seeing some new grain products and bulk materials in our mix this season. Our strategy of obtaining equipment and constructing facilities that have multiple purposes has worked to our advantage. We are basically positioned to handle any type of cargo that can be loaded onto a vessel at one or more of the marine terminals within the Port of Toledo.”

The Ports of Indiana-Burns Harbor continues to increase its tonnage in 2022 with five inbound shipments of steel last month.

“In July we saw a four percent increase in overall tonnage compared to last year. Year-to-date, Burns Harbor maritime tonnage has increased 15 percent compared to 2021. We are capturing market opportunities in grain and other mineral imports and looking at ways to sustain these shipments,” said Ryan McCoy, director of Ports of Indiana-Burns Harbor.

Led by a sizable iron ore rally, total maritime tonnage through the Port of Duluth-Superior topped 3.8 million short tons in July 2022, the port’s largest monthly total since August 2021. More than 12.6 million tons of waterborne cargo transited Duluth-Superior from mid-March through July 31, which was 13.4 percent below the five-season average, but also trending positively, with the gap narrowing nearly five percent month over month.

“July showed signs of a rebound from what was a slower first half of the maritime shipping season,” said Deb DeLuca, executive director, Duluth Seaway Port Authority. “Demand is strong for many of our port’s key cargoes, so we’re expecting tonnage totals to draw closer to the five-season average through Q4. Hopefully it’ll be a second-half surge, driven by these favorable market forces.”

The Great Lakes-Seaway System serves a dynamic economic region that includes eight U.S. states and two Canadian provinces. If the region were a country, it would have the 3 rd largest economy in the world with a GDP of $5.5 trillion – larger than that of Japan, Germany, Brazil, or the United Kingdom. The region is home to 107 million people and accounts for almost 40 percent of the total cross-border trade between the U.S. and Canada. Great Lakes-Seaway shipping is a foundation of this vibrant economy. More than 160 million metric tons of commercial cargo are transported on the waterway each year, providing low-cost and efficient transportation for the region’s manufacturing, mining, agriculture, and energy sectors.

About the Great Lakes Seaway Partnership

The Great Lakes Seaway Partnership is a coalition of leading US and Canadian maritime organizations working to enhance public understanding of the benefits of commercial shipping in the Great Lakes Seaway region of North America. The organization manages an education-focused communications program, sponsors research and works closely with media, policy makers, community groups, allied industries, environmental stakeholders and the general public to highlight the positive attributes of marine transportation.

The Great Lakes-St. Lawrence Seaway System is a marine highway that extends 2,300 miles from the Atlantic Ocean to the Great Lakes, supporting more than 237,868 jobs and $35 billion in economic activity.