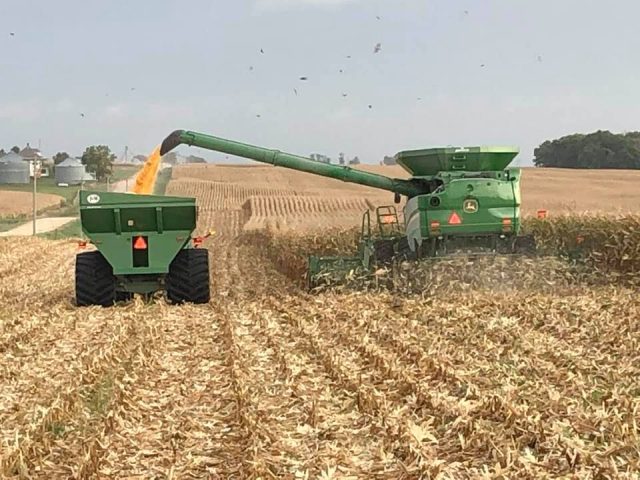 IARN — Iowa’s corn and soybean harvest continued to progress ahead of the average pace during the week ending October 24th.

The weekly Crop Progress and Conditions Report on Monday showed 60% of Iowa’s corn for grain has been harvested, one week ahead of the five-year average. The state’s soybean harvest is 83% done, six days ahead of normal.

Producers across much of the state have approximately two-thirds of their corn crop harvested, while producers in northeast and south-central Iowa have more than half remaining to be harvested.

USDA meteorologist Brad Rippey has a detailed look at corn harvest progress across the country.

“We saw at least 15 percentage points advancing during the week in terms of corn harvest progress in seven Midwestern states,” said Rippey. “Those are Illinois, Iowa, Michigan, Minnesota, Nebraska, Ohio and Wisconsin. Pretty much Corn Belt-wide, producers were going after the corn where they could in advance of weekend rain that was quite heavy in parts of the Western, Southern, and Eastern Corn Belt.”

Rippey also has a look at soybean harvest progress in main producing states.

“We saw three states – all in the Midwest – that have passed the 90% mark in terms of soybean harvest progress,” said Rippey. “Those are the three drought affected states in the northwest where the crop dried down early and has been ready to harvest. Minnesota now 95% of the soybeans harvested, South Dakota 93%, and North Dakota 91%. All three of those significantly ahead of the five-year average pace.”

Pasture condition in Iowa rated 32 percent good to excellent. Livestock were reported to be in good condition with some cattle grazing on stalks. Muddy feedlots may be an issue following rain over the weekend.