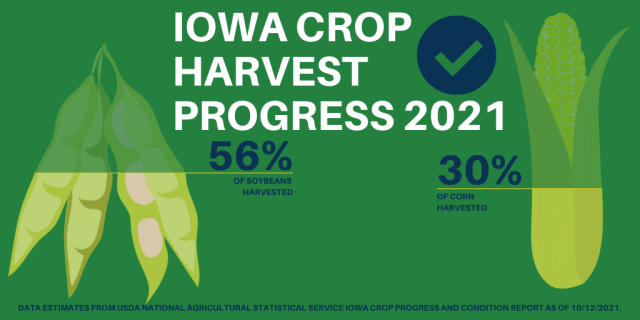 IARN — The soybean harvest in Iowa is now past the halfway point while corn isn’t too far behind.

USDA Meteorologist Brad Rippey says the corn harvest continues to accelerate throughout the rest of the country.

“Just in the last three weeks, we have seen one-third – or 31% – of the U.S. corn acreage harvested,” said Rippey. “During the last week, we did see our greatest harvest progress in the drier and drought-affected Upper Midwest.”

Rippey adds conditions have been nearly perfect for this year’s soybean harvest.

“The (national) soybean harvest has almost reached the halfway mark,” said Rippey. “43% of that harvest has come within the last three weeks as – for the most part – we have had that wide open weather, especially in the Western Corn Belt.”

In Iowa, the report showed pasture condition rated 32 percent good to excellent. Overall, livestock were faring well, although conditions varied with some reports of muddy feedlots but also water shortage issues for cattle on pasture.