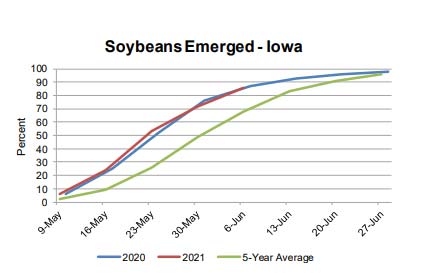 Statewide Iowa — Some farmers had to put seed into their planters for a second time last week.

The latest U.S.D.A. report says some growers in the upper two-thirds of the state re-planted corn and soybeans due to frost damage that occurred in late May. Overall the report says 96% of the corn has emerged  which is nine days ahead of the five-year average. The corn that is up is rated at 77% good to excellent.

One-quarter of the soybeans remain to be planted heading into the week and that is now two-percent  which is almost two weeks ahead of normal. Eighty-six-percent of the soybeans have emerged. Soybeans are rated in 73 percent good to excellent condition.