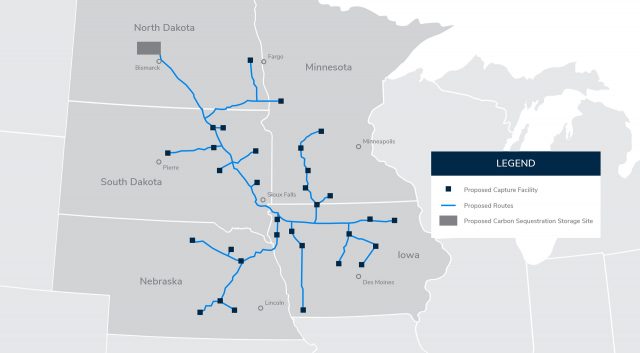 Statewide, Iowa — Starting Friday, August 5th, Summit Carbon Solutions will start providing state regulators with lists of landowners along its proposed pipeline who have not agreed to voluntary easements. Justin Kirchoff, president of Summit Ag Investors, says hundreds of people have signed contracts to let the carbon pipeline run through their property.

Summit submitted an application to the Iowa Utilities Board for a pipeline permit earlier this year. State regulations require disclosure of which parcels along the route are not yet secured voluntarily.

Kirchoff says people understandably have questions about carbon capture and the pipeline itself.

The Dakota Access pipeline, which cuts diagonally through Iowa, was first proposed nearly a decade ago. In 2017, it began shipping crude oil from North Dakota to a terminal in Illinois. Kirchoff says Summit has obtained voluntary easements from about a third of landowners in five states. The pipeline’s Iowa segment is to connect with a dozen ethanol plants in the state, to lower the carbon footprint of the fuel that’s produced.