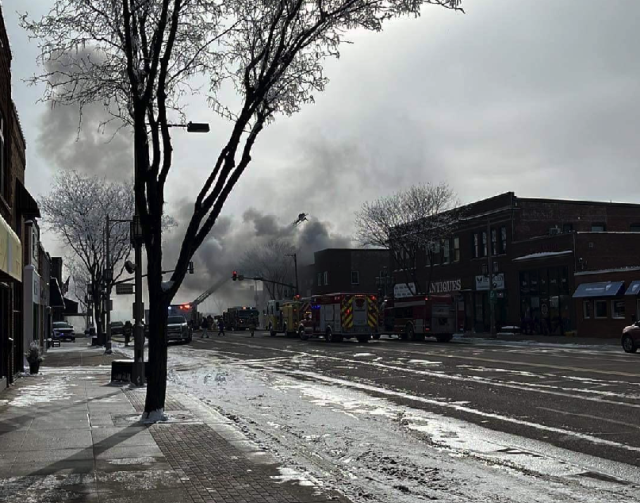 Spencer, Iowa — Five businesses and eight apartments were damaged in a fire in downtown Spencer on Sunday afternoon, January 22, 2023.

According to Spencer Fire Deputy Chief Mark Stover, Spencer Fire-Rescue was dispatched to 215 Grand Avenue Apartment #5 at about 12:35 p.m. He says the occupant of apartment 5 called 911 and advised that she had just gotten home and that there was a lot of smoke in the apartment. Grand Avenue is Spencer’s main street and is in the central business district of the city.

While the fire was being attacked, he says the roof started to fail, forcing firefighters to evacuate the second floor of the building. He says that forced them into a defensive firefighting operation. Elevated streams from two ladder trucks were then used to bring the fire under control.

Stover tells us the second floor and roof at 221 Grand Avenue suffered extreme fire damage with smoke damage throughout the second floor of the adjoining buildings. Several businesses on the first floor suffered minor to extreme water damage.

On-scene reports indicate the businesses included a law office, a massage business, a pet groomer, a boutique, and a restaurant.

The fire is under investigation at this time says Stover.

He says 22 Spencer firefighters responded and were on the scene for approximately eight hours. Mutual Aid assistance was requested from Every Fire-Rescue, and a 100-foot aerial ladder responded from the Spirit Lake Fire Department.

Witnesses tell KIWA that the fire is in a building located between 2nd and 3rd streets, on the west side of Grand Avenue, which is Highway 71 & 18, passing through the heart of downtown Spencer. The building reportedly houses a business on the ground floor, with multiple apartments upstairs.

Firefighters from Spencer and Everly were called to the scene to battle the blaze, according to on-scene reports.

No further information is available at this time.