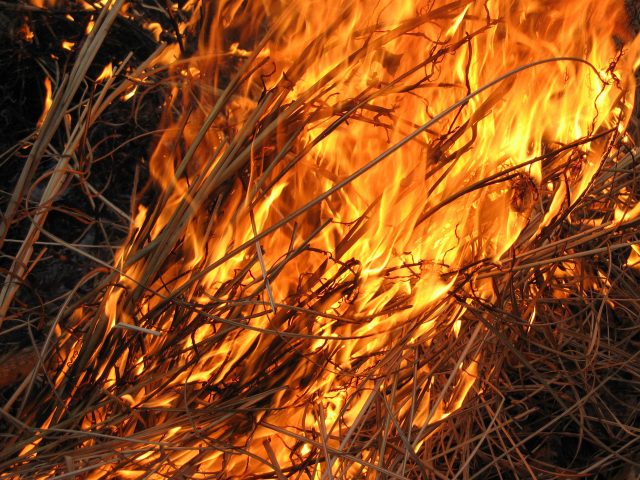 Rock Valley Firefighters put out a hay bale fire on Monday. Fire Chief Brent Eshuis says 60 round bales were lost in the fire along with some silage and the tarp and tires on top of the silage. He says a spark from a nearby burn pit lit the cornstalk bales on fire. Firefighters from Hull, Sioux Center, Hudson, Ireton, Hawarden, and Maurice were also called to the scene. Firefighters remained on the scene for two to two and a half hours.

The Hawarden Fire Department was called to a small grass fire near the county shed northeast of Hawarden on Friday evening. Fire Chief Duane Schiefen says it didn’t amount to much, but the mist from their firefighting made the road icy, so they called for sand trucks to mitigate the hazard. The cause of the fire is undetermined.

Alton firefighters were called to a ditch fire out of control on Sunday afternoon, shortly after 2 p.m. Alton Fire Chief Quintin Van Es reports that embers from the intentional ditch burn floated into a waterway to the west and caught that area on fire. He says the farmer couldn’t keep up with it. Van Es says fire in the waterway would have led into other people’s property, so the fire department was called for assistance.

The Rock Rapids fire department was called to a fire on the southeast corner of town on K52 just north of the curve on Sunday afternoon, about 5:30. Fire Chief Ed Reck reports that a skid loader and about 15 bales of grass hay were destroyed in the blaze. The cause is undetermined. Reck says the owner of the property sustained a cut to his hand while fighting the fire and was taken to the hospital by private vehicle. Reck says the firefighting, while rural in nature was assisted because they could reach the very last hydrant on the city system. Firefighters were there for two to two and a half hours.

We also have word of a pair of fires near Granville and Hospers on Sunday afternoon and evening.

The National Weather Service, in a social media post, says that, “For the next couple of days our wildfire risk is going to be elevated. That means that the weather is going to be warm, dry, and windy, which results in fuels drying out. When they are dried and cured (that means brown and crunchy), it makes them more susceptible to catching & spreading fire.” They say all the conditions are present including low relative humidity, strong winds, warm temperatures, and abundant fuels like grass and crop residue like cornstalks and stubble.