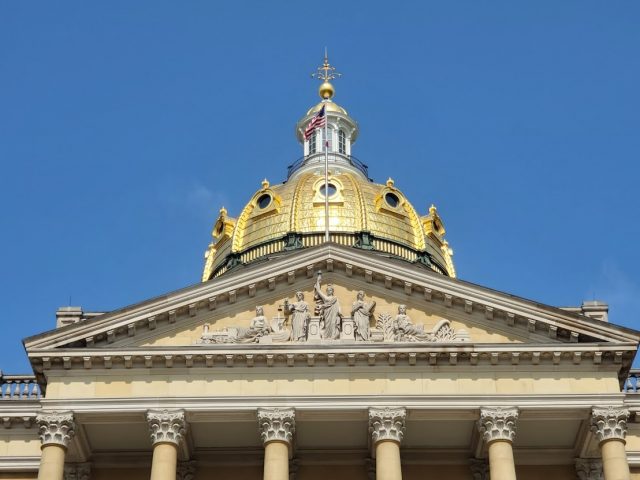 Des Moines, Iowa — A bill banning transgender athletes from girls’ and women’s sports in every Iowa school, college and university is now law. The bill passed the Senate Wednesday and Governor Reynolds signed it into law Thursday, surrounded by a large crowd of girls, parents and lawmakers.

The ban also applies to women’s sports in all colleges and universities in Iowa, limiting participation to athletes who have female marked on their birth certificates. Senator Jeff Taylor, a Republican from Sioux Center, says transgender ideology poses a danger to women.

Senator Jesse Green, a Republican from Boone, says the bill is historic.

Governor Reynolds said Iowa girls are in danger of losing out on college scholarships or winning championships if they’re competing against transgender athletes who were born male, but identify as female. Senator Pam Jochum, a Democrat from Dubuque, says the bill will isolate trans youth just like previous policies that forbid participation based on other characteristics, like race.

Eleven states have passed similar trans athlete bans and lawsuits challenging those bans have been filed in four of them. Senator Claire Celsi, a Democrat from Des Moines, says in 2020 the U.S. Supreme Court ruled the Civil Rights Act protects transgender Americans from discrimination.

Senator Jim Carlin of Sioux City says he and other Republicans are standing up for girls and women.