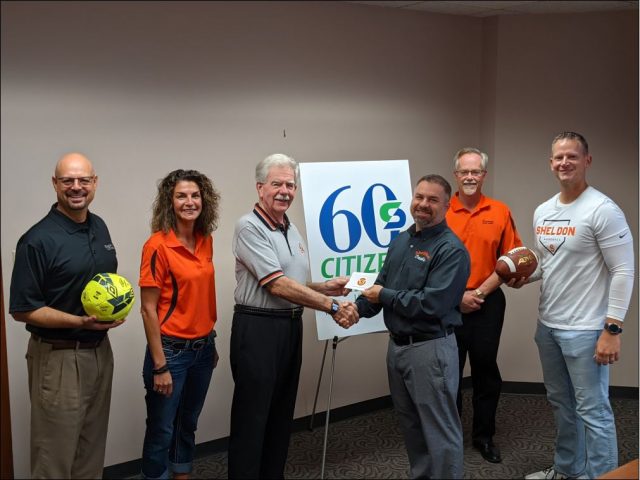 Sheldon, Iowa — Another company serving Sheldon has announced a large gift towards the turf project at Sheldon High School.

According to Citizens State Bank, they are pleased to announce their $50,000 contribution towards the turf facility upgrade.

The venture, a collaborative project between the Sheldon Community School District (CSD), Northwest Iowa Community College (NCC), and the City of Sheldon, will be located on the current Sheldon CSD football field, according to NCC officials.

They tell us the new playing surface will be used for the Sheldon CSD football team, soccer program, and the marching band. Additionally, Northwest Iowa Community College will be utilizing the turf when they begin their intercollegiate soccer program, which is slated to begin in either Fall 2023 or Fall 2024.

Rob Dixon, Chairman and CEO of Citizens State Bank say that Citizens State Bank has a tradition of helping their local schools, and this project benefits both Northwest Iowa Community College and the Sheldon Community School District. The field and scoreboard will give utility and versatility to their athletic and music programs and will be a great improvement to the athletic complex. He says, “The bank’s roots are in Sheldon and projects like this make Sheldon a better place.”

We are told that groundbreaking for the project is slated to begin in Spring 2022, with use by the Sheldon School District in the Fall of 2022. The cost of the project is estimated to be $1.4 million dollars, which includes the turf project and an enhanced scoreboard. Currently, around $1.1 million has been solidified between the Sheldon CSD, NCC and various donors. For more information on the project or to donate, contact Eric Maassen at the Sheldon CSD at 712-324-2504 or Kristi Landis at NCC at 800-352-4907 ext. 164.