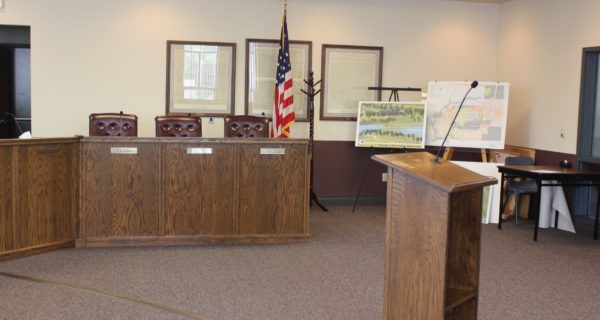 Sheldon, Iowa — During their regular meeting Wednesday, the Sheldon City Council had been scheduled to hold a pair of public hearings on the redevelopment of the Bethel Reformed Church property. One of those hearings was held, but the other put on hold earlier Wednesday.

The Bethel property, which consists of the block between 6th and 7th Avenue, on the north side of 7th Street, will be redeveloped as residential housing. The church building, which was severely damaged in a September 2016 blaze, was demolished earlier this year. The hearing dealing with the plat and subdivision was held, while the hearing involving the development and minimum assessment agreement was postponed. Sheldon City Manager Sam Kooiker explains….

In other action, the Council held the first reading of an amendment to the City’s fireworks ordinance. Kooiker says it involves several changes to the existing ordinance, including the days and hours when consumer fireworks may be shot off.

After the first reading, the Council passed the amendment on to a second reading at their next meeting, at which time they can pass it to a third reading, or waive the third reading and pass it into law.

Also during Wednesday’s meeting, the Council formally approved a grant agreement with the Iowa Department of Natural Resources to be used for the Crossroads Trail Project.

Kooiker reported to the Council that 269 Sheldon residential properties signed up for this year’s Clean-Up Week, which is underway. That’s down slightly from last year’s record number. And he says that when the Household Hazardous Materials Trailer was brought to Sheldon last week, 43 customers dropped off 3,560 pounds of hazardous household materials and paint during the afternoon the trailer was in town.

The meeting ended with a closed session for the discussion of a potential real estate purchase. Kooiker says no action was taken.