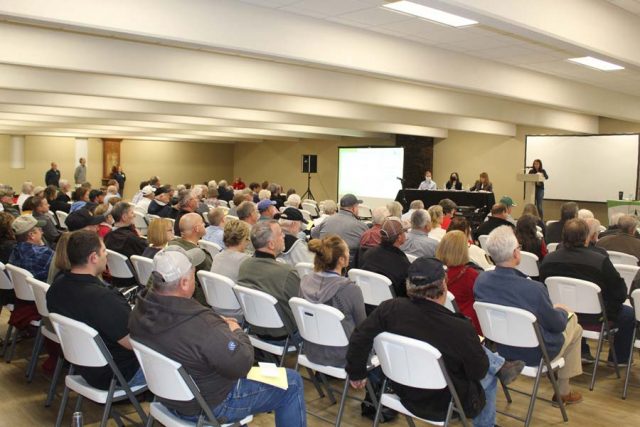 Northwest Iowa — The Iowa Utilities Board is holding several public hearings on a proposed carbon pipeline that would run through 36 Iowa counties.

Navigator CO2 Ventures proposes what it calls the Heartland Greenway System pipeline — which would cross Iowa and four other states — transporting carbon to be stored in Illinois. At a hearing in Rock Rapids Monday, landowner Dan Rentschler, said he believes the project risks outweigh its good.

Landowners will receive compensation for the land being used and for any crop damage within the first three years of its construction. Landowner Bill Van Gerpen is another landowner who would be impacted by the project. He says he doesn’t trust that his northwest Iowa land will be safe.

There was also a hearing in Le Mars Monday. Plymouth County Board of Supervisors chairman, Don Kass of rural Remsen asked members of the Utilities Board about how the company would use eminent domain to get the land it needs.

IUB chair Geri Huser said the Iowa statute lays out a process where the company can come in and say they can’t work out an arrangement with landowners. She says the process also includes allowing landowners to offer an alternative route. Navigator vice president Elizabeth Burns-Thompson said they don’t want to have to use eminent domain.

Company representatives also said they would collaborate with landowners to ensure fair compensation and safety. It is estimated that the pipeline would capture 15 million metric tons of carbon dioxide each year.