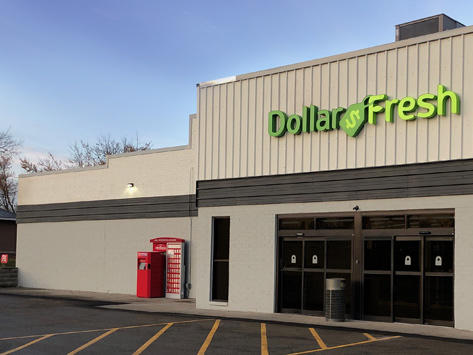 Orange City, Iowa — While they still aren’t officially announcing the exact location of the planned store in Orange City, Hy-Vee officials have released a little more information about the Dollar Fresh store.

In April, Hy-Vee Public Relations Director Christina Gayman told us the company is planning to locate a grocery store in the Sioux County seat, but that it will be one of Hy-Vee’s “Dollar Fresh” stores. While Gayman confirmed the plans for a Dollar Fresh store to be opened in Orange City, she declined to give further information at that time, including possible locations for the proposed new store.

Further details are now trickling out. This week Gayman told us that the building is approximately 29,000 square feet and the store is slated for a late 2021 opening.

Gayman says their Dollar Fresh stores are smaller-format locations, but they do also have some Hy-Vee locations of similar size throughout their eight-state region. For comparison sake, according to aerial photos, Sheldon’s Hy-Vee is roughly 30,600 square feet, but it includes a bakery, a liquor store, and more.

The March issue of Progressive Grocer says Dollar Fresh is Hy-Vee’s “answer to deep discounters like Aldi — which measure around 30,000 square feet and provide a high-quality product assortment at low prices in smaller communities…”