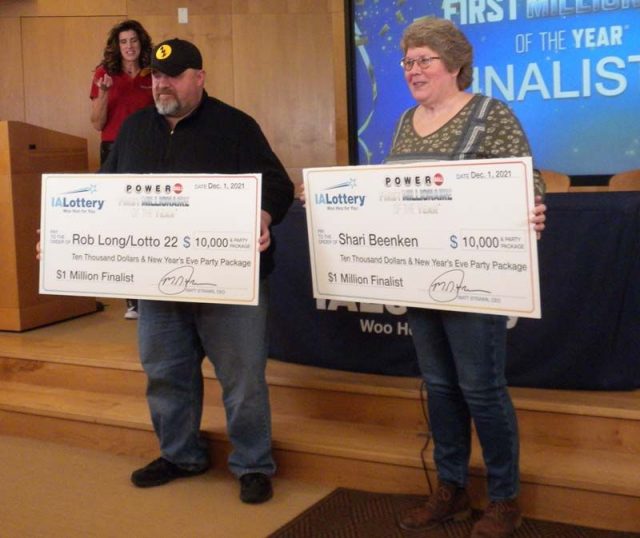 Statewide Iowa — Two of the five nationwide finalists for a one million dollar New Year’s Powerball prize drawing are from Iowa.

One finalist is Rob Long of Waterloo who buys tickets for a pool of his co-workers, friends, and family who call the group Lotto 22.

Shari Beenken from the small Kossuth County town of Titonka is the other finalist. Beenken  and Long had to keep the news from others until the official public release and she says that was tough to do during the Thanksgiving holiday with her sister.

Players had to enter non-winning tickets to get a chance at the New Year’s drawing. Long says his group didn’t know he had entered.

They each have already won ten-thousand dollars in cash and a ten-thousand-dollar home entertainment package for being finalists. Long’s group will each get around 45-thousand dollars if they win the million-dollar prize. Beenken will get the keep the entire one million dollars if she wins. She and her husband want to get a vacation home, and she’d like some new appliances.

Beenken says it was hard waiting to tell everyone about being a finalist, and now there is a whole month to wait before she knows if she won.

Long has the same feeling.

They will get to find out before midnight as the announcement on ABC’s broadcast of “Dick Clark’s Rockin’ Eve” in Times Square, New York will come in the eastern time zone  which means 11 pm Iowa time.