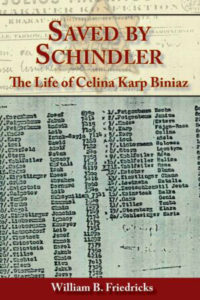 Indianola, Iowa — A new biography by an Iowa author details the long life of a woman who was just eight when the Nazis invaded her home country of Poland and she endured two concentration camps before being placed on the famed Schindler’s List.

Celina Karp Biniaz didn’t talk about her Holocaust experience until the movie directed by Steven Spielberg came out in 1993. Biniaz says, “Oskar Schindler gave me my life, but Steven Spielberg gave me my voice.” Author Bill Friedricks, a history professor emeritus at Simpson College, says Biniaz spent part of her teen years in Iowa.

For his book, “Saved By Schindler: The Life of Celina Karp Biniaz,” Friedricks says he conducted multiple interviews with her via phone and Zoom during the pandemic, before finally meeting her in person. He says it was hard to keep his emotions in check while listening to stories of slave labor camps, and later, her time at Auschwitz, where she lived in constant fear, witnessing unspeakable horrors.

When he was first approached to write this biography, Friedricks says he was involved in other projects and wanted to put it off a few years, but was told given the woman’s age, it needed to be now.

Biniaz is now 91 and “lived the American Dream,” according to Friedricks. After earning a master’s degree in education, she found her calling as a teacher of children with special needs, she got married, had children of her own, and eventually settled in southern California. Friedricks says he first encountered Biniaz in 2017 when she gave a talk in West Des Moines about her experiences.