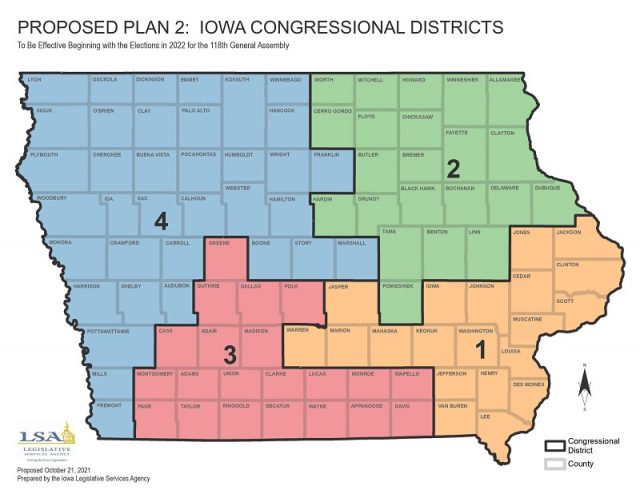 Statewide Iowa — The second plan  for reconfiguring Iowa’s congressional and legislative districts has been delivered and, if approved by the legislature next week, it could pit two incumbent members of the U.S. House against one another.

Congresswomen Cindy Axne, a Democrat, lives in West Des Moines. Congresswoman Mariannette Miller-Meeks, a Republican, lives in Ottumwa. Both of their homes are in the proposed third congressional district. That sets up a potential incumbent-versus-incumbent race for reelection in 2022 if neither moves. Axne has said she’s also considering a run for governor rather than pursuing a third term in the U.S. House.

Republican Congressman Randy Feenstra of Hull lives in the proposed fourth district and he announced this week he’s running for a second term in the U.S. House. The proposed district includes the cities of Council Bluffs and Sioux City on the west and, on the east, Ames and Marshalltown. Republicans have a significant voter registration edge over Democrats in the current fourth district. In the new district that’s proposed, 61 percent of registered voters are Republicans.

The 32 Republicans in the Iowa Senate rejected the first plan for redistricting. Under Iowa law, Plan 1 and Plan 2 are drawn by the non-partisan Legislative Services Agency and presented to legislators for an up or down vote.

The Iowa Legislature will convene in special session next Thursday to vote on the second plan for redistricting. This process happens after every Census, to redraw the boundaries for Iowa’s congressional districts as well as the 150 state legislative districts to reflect population changes.