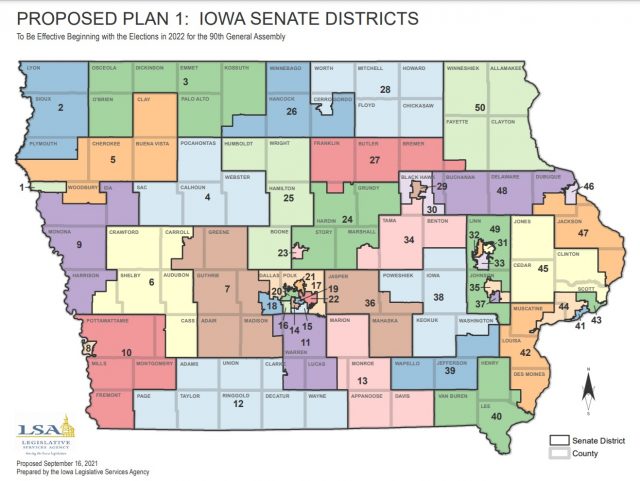 Statewide Iowa — The League of Women Voters of Iowa is calling on the Iowa Legislature to approve Plan 1 for redistricting.

Maps proposing new boundaries for Iowa’s congressional and legislative districts were released last week. Terese Grant is president of the League of Women Voters of Iowa. She says the plan does an incredible job of reflecting the population shifts that occurred in Iowa over the past decade.

A dozen people have testified at the two public hearings that have been held on the redistricting plan and all urged legislators to approve the first plan that’s been released. If lawmakers reject it as well as the second plan developed by the non-partisan Legislative Services Agency, the Republican-led legislature could choose to make changes to a third plan. John Hale, the owner of a consulting firm in Ankeny, says Plan 1 reflects the significant population shifts that have occurred in Iowa, with 68 of 99 counties losing population from 2010 to 2020.

Ryan Crane, who spoke at Monday’s public hearing, says Plan 1 for redistricting is based on the data.

He says if Republicans who control the legislature make changes and adopt a third plan, that would generate negative headlines for Iowa. Since Iowa’s redistricting law has been on the books, the legislature has approved plans drawn up by the non-partisan Legislative Services Agency in 1981, 1991, 2001 and 2011. A third public hearing on the first redistricting plan is scheduled for Wednesday night.