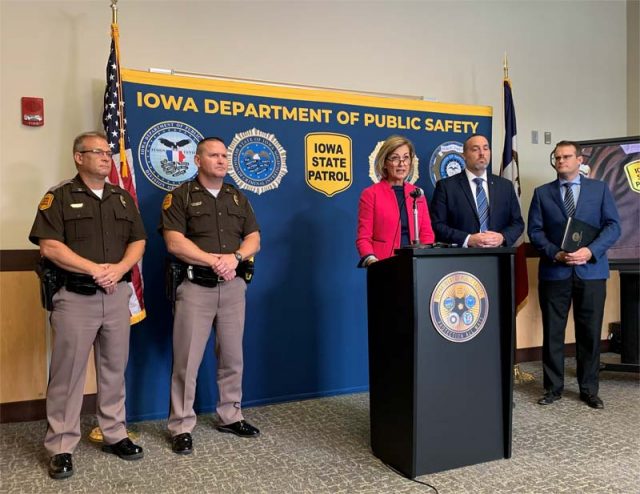 Des Moines, Iowa — Governor Kim Reynolds says undocumented immigrants and illegal drugs are infiltrating Iowa and she may send state troopers back to Texas to provide border security in the future.

The state will spend about 300-thousand dollars on the two-week mission 28 state troopers just completed in Texas earlier this month.

Dozens of troopers have been assigned to duty at next month’s Iowa State Fair as well as this week along the route of the Register’s Annual Great Bicycle Ride Across Iowa. Reynolds says she’ll re-evaluate in late August and may send state troopers back to the southern border. Reynolds says Iowa and other states like Nebraska and Florida have had to step up because the Biden Administration’s policies have made the border a magnet for illegal migrants, drug smugglers and human traffickers.

Reynolds held a news conference at the Iowa Department of Public Safety late Wednesday morning. The patrolman who headed the mission to Texas outlined the ways in which Iowa officers assisted Texas Rangers and federal agents. Captain Mark Miller says some of the Iowa officers assisted in human trafficking investigations and traffic stops. A female trooper at a border gate noticed a migrant in the crowd was going into labor and summoned an ambulance.

Salaries account for about a third of the roughly 300-thousand dollar budget for this mission, with the rest spent on things like food, hotels and overtime pay. Miller says no State Patrol vehicles went south. Instead, troopers did overnight shifts with Texas officers.

While Texas officers dealt with a driver, Miller says the Iowa troopers were able to interview others in the vehicle and determine if human trafficking was an issue. In one instance, Miller says a trooper found a woman hidden in a pick-up who was in critical condition due to dehydration. The leaders of the Iowa Democratic Party’s Latinx Caucus issued a statement after Wednesday’s news conference, saying they’re grateful for the professionalism these troopers showed at the southern border, but they accused the governor of stoking fear against immigrants with her rhetoric. The group’s co-chairs say it is absurd for Reynolds to suggest, as she did late last week, that people seeking asylum are causing the spread of the Delta variant of COVID-19.