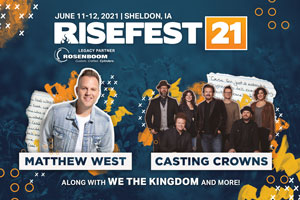 Sheldon, Iowa — RiseFest, the annual Christian music festival held each June in Sheldon, is set to take place this weekend!

This year’s RiseFest has been in the planning stage since the last RiseFest, which was held in 2019. After a year without RiseFest last year, Rise Ministries founder and president, Rob Roozeboom says RiseFest 2021 will unofficially begin Friday morning when the campers begin rolling into the festival campgrounds.

The process of getting ready for RiseFest 2021 has had it’s challenges. Last week, officials made a plea for more volunteers for this year’s festival. Roozeboom says they had to cut off the volunteer sign-up last Friday. We asked him about the volunteer situation as it stands now.

Roozeboom stressed that there will be plenty of food vendors on the grounds, and with the heat, several sources for water, as well.

The gates open Friday afternoon at 3:30pm, with Cade Thompson hitting the stage at 4:15. Friday night’s festivities wrap up at 10:30.