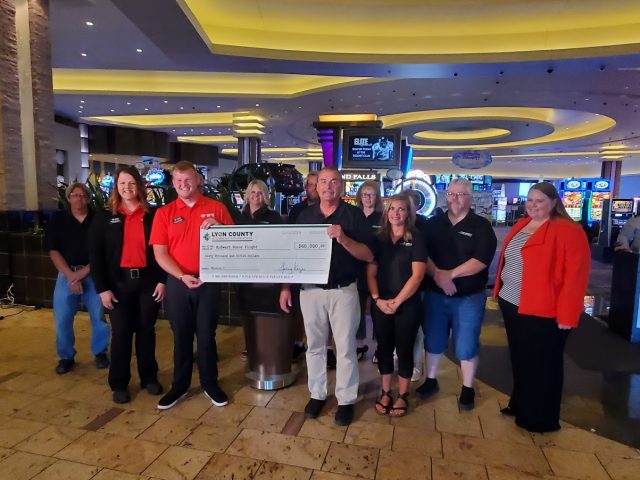 West Of Larchwood, Iowa — A plane full of veterans will be able to see their war memorials in Washington, DC, thanks in part to a grant from the Lyon County Riverboat Foundation.

That’s Jerry Keizer, past president of the Lyon County Riverboat Foundation at a ceremony on Monday morning. Aaron Van Beek with Midwest Honor Flight tells us how many and what kinds of veterans will be going.

The grant is for $60,000. Van Beek says it costs $150,000 for a flight, and he says they have over 800 Midwest veterans on their waiting list. He also tells us that they have another flight scheduled for October 9th, and 120 Vietnam vets will be going to DC that day.

Riverboat Foundation president Waagmeester tells us that the board is extremely happy and proud to be able to contribute to the Honor Flight.

Van Beek encourages you to contact Midwest Honor Flight if you or someone you love is a veteran who would like to fly to DC to see the memorials. He says they always appreciate your donations as well. Find out more at midwesthonorflight.org or call (605) 215-1319.