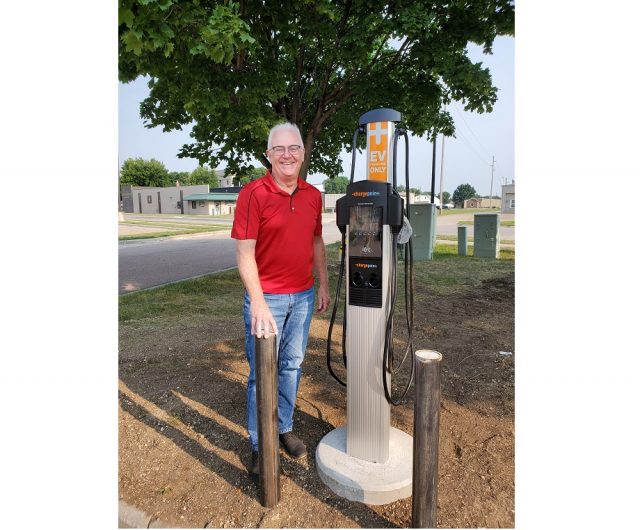 UPDATE — According to Rock Rapids Municipal Utilities personnel, the charger  is now available for the public for use.  There is a charge of $0.15 per kWh used during the charging session.  Questions about using and paying for charging can be answered at https://www.chargepoint.com/drivers/support-faq/

Rock Rapids, Iowa — As far as we know, it’s the first of its kind in Rock Rapids. And if things keep going the way they are, it might be the coming trend.

Through the generosity of a couple of grants, Rock Rapids Municipal Utilities has installed what’s thought to be the first electric vehicle charging station in that town.

Rock Rapids Municipal Utilities General Manager Jim Hoye tells us how this has come to be.

The charging station is close to downtown businesses and Highway 9, on property owned by the city, making it convenient for motorists and would-be shoppers. It is located on the south edge of the main parking lot of Forster Community Center, which is right across the highway from Rock Rapids’ grocery store and Subway.

Hoye says part of the funding also comes from Missouri River Energy Services — an organization of 61 member municipalities (including Rock Rapids) that own and operate their own electric distribution systems. MRES generates and purchases power that is sold to the municipalities, and ultimately, their customers.

He says the EV charging station will be a “ChargePoint” station, meaning you can pay for your purchase with your phone.

Hoye says they try to locate the charging stations within a certain distance of each other, and they thought Rock Rapids was a good point between the Iowa Great Lakes and Sioux Falls to have a charging station. He tells us there is also a charging station in Sheldon, which is located on the west side of the parking lot at the Fareway Food Store on Highway 18 east. According to an online search, there are also ChargePoint stations in Rock Valley and Sioux Center, plus several along I-90.

While Hoye says electric vehicles will become more common in our area, he says he doesn’t think they will completely replace gasoline cars until battery technology is better. He says the cold temperatures are not conducive to the efficient operation of a car running on batteries yet. And he feels like the electric infrastructure is there now to handle charging vehicles for at least the near future.