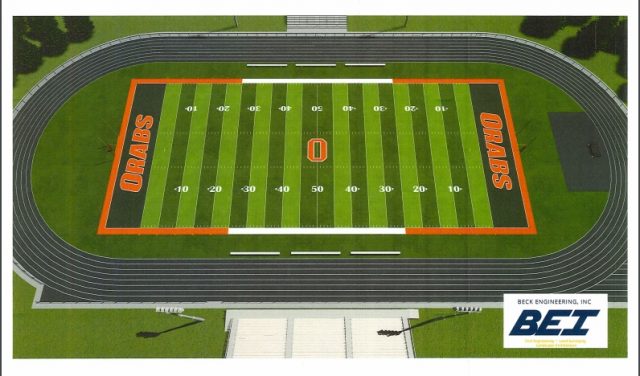 Sheldon, Iowa — At their regular monthly meeting earlier this week, the Sheldon Community Schools Board approved an Engineering Services Agreement with Beck Engineering for converting the Orab Football Field from a grass playing surface to artificial turf.

The Engineer’s Cost Estimate for the project is just over $1.286-million. Sheldon Schools Superintendent Cory Myer says that, while the initial cost is significant, there may be potential future cost savings with a turf field.

Myer says he anticipates that a turf field will be available for use much more than is the current grass field.

He says the Orab football and soccer teams are excited about the upgrade.

Myer says the turf field will also be a boon to the school’s marching band.

He says Orab Field will be used by other entities, as well, such as the City of Sheldon and Sheldon’s private grade schools, and he says Northwest Iowa Community College is partnering with the school district on the project.

It should be noted that the Engineer’s Estimate of Cost is just that, an estimate. Often those estimates come in well above the actual cost, which won’t be known until after contractor’s competitive bids are received for the project.