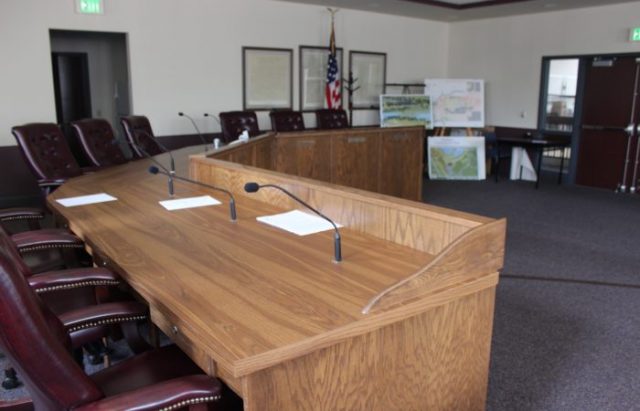 Sheldon, Iowa — When the Sheldon City Council met this Wednesday, July 20th, they held a pair of public hearings dealing with the issuance of capital loan notes for financing projects in the city, and accepted the retirement of another Sheldon Police officer.

Both hearings were on plans to authorize loan agreements, and both measures passed. The first one will not exceed 3.5 million dollars in general obligation capital loan notes, “for essential corporate purposes, to provide funds to pay the costs of aiding in the planning, undertaking, and carrying out of urban renewal projects including the acquisition, construction, reconstruction, improvement, repair and equipping of the East Side Water Tower.” The other agreement is similar, except the amount is 2.4 million dollars for urban renewal projects including the reconstruction of Western Avenue from Highway 18 to 16th Street. However, City Manager Sam Kooiker says the Western Avenue notes probably won’t be issued until fiscal year 2024-2025.

The council approved a project to replace about 250 feet of 36” storm sewer, build a new junction box, and relocate a water main that currently goes directly through a storm sewer structure. The proposal in the amount of $17,900 from Beck Engineering takes the project from design to completion.

The council accepted, with regrets, the retirement of Sheldon Police Sergeant Todd Wood. Kooiker says Wood has served with the Sheldon Police Department since May 1, 1995.


Sgt. Wood’s retirement date will be September 30th. There are plans in progress for an open house.

The council also approved a zoning administration and code enforcement agreement with Planning Solutions, LLC, says Kooiker. He says they’ve decided not to hire a full-time employee who would serve as an EMT and a code enforcement officer.

Council members also talked about three adjacent parcels on Western Avenue which, according to Kooiker, have had an unauthorized junkyard for many years. He says the situation has prompted multiple complaints from the neighborhood in terms of visual impact and vermin. The city is looking at the purchase of one of the parcels for $5000, says Kooiker.

The council also talked about fireworks, continuing their discussion from the last meeting.

The council is gathering information on the issue and they hope to have more information about the complaints by the next meeting. Council members said that one of the problems is that there aren’t enough police officers to keep up with all of the fireworks calls. One of the suggestions was to limit the days or hours that fireworks can be used.

The council is also considering the costs of removing trees in the right of way between sidewalks and streets when they are damaged or destroyed by storms or pests. No decisions were made, but they talked about it a little more. Public Works Director Todd Uhl said that with the Emerald Ash Borer now in the area, they will need to remove all ash trees in the area between the sidewalks and the streets. He says the estimate for that work is right at one million dollars. The council will continue to gather information, but they are considering banning the planting of trees between the sidewalk and the street, at least temporarily.

Some advanced dates from Kooiker:
Regular clean-up week will begin on September 19th. Click here for the instructions and form.
Tuesday, September 13th is the date for a visit from the hazardous materials trailer.