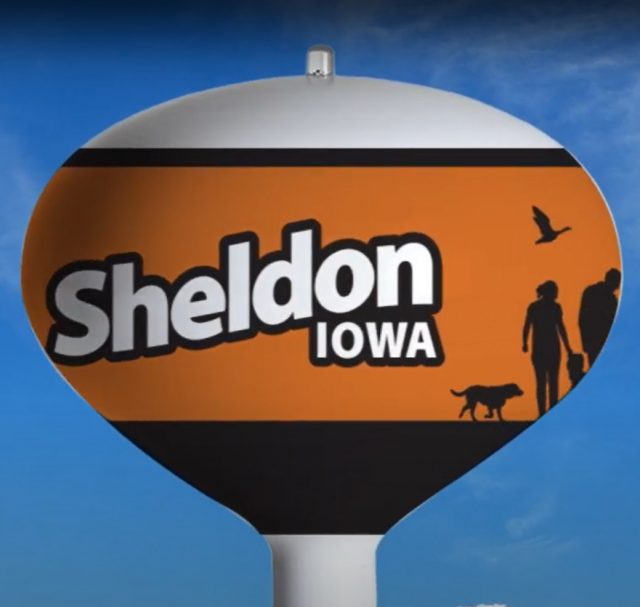 Sheldon, Iowa — The bulk of Wednesday evening’s Sheldon City Council meeting was spent hearing about and discussing a proposal for how to paint the new Sheldon water tower that’s being planned in the southeast part of the city.

Among items In the consent agenda that were approved were liquor licenses for Crossroads Pavilion and Los Tulipanes, a resolution authorizing stop signs to stop 7th Street at 5th Avenue and to affirm the no-parking signs at 11th Street and 5th Avenue, the approval of Greg Jacobsma as a full-time police officer, and more.

The council also talked about the bids for a recreational trail project. Public Works Director Todd Uhl tells us that the low bid was significantly less than the estimate.

And the council did go on to approve that bid.

The council also discussed the Iowa DOT Agreement for Urban State Traffic Engineering Program — or “U-Step” grant, in the amount of $200,000 toward the proposed traffic signal at Hwy 18 and 34th Avenue at Sheldon Crossing. Uhl says this is not the first time they have had discussions with the state about a traffic light there, but due to Sheldon’s growth and other factors in the area, he says the project now meets the state’s criteria. The resolution was approved, and Uhl says they hope to put it out for bids sometime this fall. However, he says due to supply chain issues, lead times are lengthy and the estimate is that completion of the project may not occur until 15 to 18 months from now.

Teri Elgersma then addressed the council about the proposed “paint job” for the new water tower. She says in addition to the name of the community in a stylized font, they also have chosen some scenes to be painted on the tower.

She says they went with some fairly obvious colors.

Elgersma then showed a video of a simulated fly-by of their design on a water tower, which may or may not be the same type of construction as what is eventually chosen by the council:

Elgersma is a member of a committee selected to discuss the issue. Other members are Ellie Waring, Ron Beenken, Aaron Beenken, Maleri Schilling, and Brittnie Storm.

The council voted to use the “design as presented, subject to minute changes, but the design will be the approved representative spec.”

You can watch the entire meeting below.