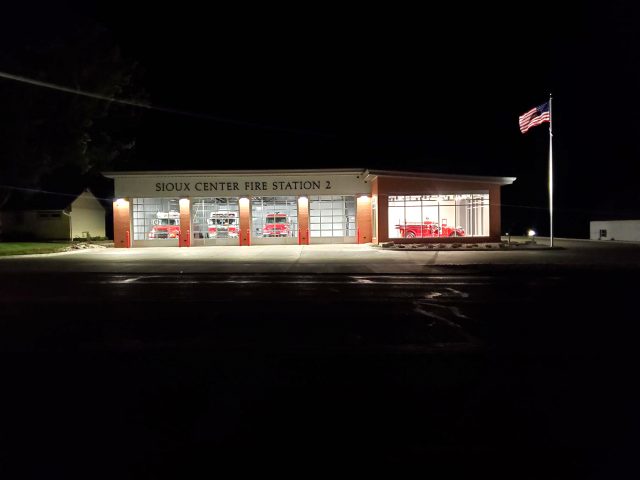 Sioux Center, Iowa — Sioux Center firefighters are busy lately. They had a fire call, a chamber coffee at the new Fire Station Two, another fire call during the coffee, and there’s an open house scheduled for this Thursday at the new station.

According to Sioux Center Fire Chief David Van Holland, about 8:05 a.m. on Wednesday, October 6th, the Sioux Center Fire Department was called to the report of a grain bin fire at 3890 Garfield Avenue, about two and a half miles west of the Hardee’s corner. That’s the location of Siouxland Energy and Livestock.

The chief says the fire department saw smoke from the grain leg as they approached the scene. They found that a hot part had started the chaff around the part on fire, which he says they extinguished with water.

Van Holland says no injuries were reported. He says they thought they were dealing with burning grain, so they put two other departments on standby, but did not end up needing their help.

He says the cause of the fire appeared to be mechanical in nature. A bearing is thought to have gone out and got hot, which caused the fire.

Chief Van Holland reports that there was no damage to speak of except the parts that needed to be replaced. He says the firefighters who responded were on the scene for an hour and a half.

Next, it was time for the Chamber Coffee and Ribbon Cutting. Chief Van Holland tells us about it.

He tells us about the new station.

He says they have much more space, and the gear room is pretty special too.

Van Holland tells us it will also be very nice for training.

If you’d like to come to see the new station on South Highway 75 in Sioux Center, there’s going to be an open house this Thursday evening.

We are told the new station took nearly two years to complete and cost $1.3 million. It was funded by the City of Sioux Center, donations from several members of the community, and the Sioux Center Fire Department.