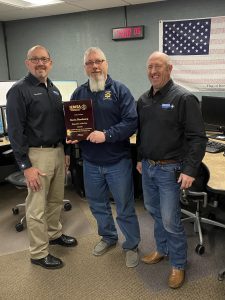 Altena says Kevin Harskamp was a recipient of the Iowa Emergency Medical Services (EMS) Association’s Dispatcher of the Year Award.

He says the award was a result of the nomination by members of the Sioux County EMS Association. The EMS association consists of members of 10 emergency response agencies in Sioux County.

The award recognized Harskamp and the work he does with receiving and dispatching medical 9-1-1 calls and the important role of emergency dispatchers in the EMS system.

One of Sioux County’s EMS providers says, “Kevin is known to have a calming voice during difficult calls and he just gets the job done.”

Harskamp has been a dispatcher with the Sioux County Sheriff’s Office for 28 years and was promoted to Communications Supervisor in 2009. He recently retired from the Boyden Fire Department and the Boyden Ambulance Service.

Harskamp says he appreciates being recognized, but quickly points out the importance of the team of seven full-time and two part-time dispatchers that work with him.

He says, “We have one of the best teams in the communications center; the group of people that I work with every day are the reason things go so well and callers receive the help they need. It is truly an honor to work with all of the staff at the Sioux County Sheriff’s Office.”