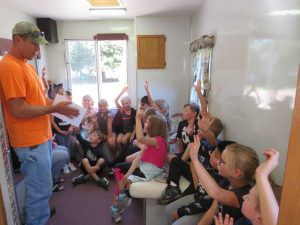 The Mobile Fire Safety house was brought to the schools where fire fighters from Hull and Boyden talked with students in Kindergarten through third grades. Students were shown examples of fire safety in the kitchen, living room and bedroom areas of the Fire Safety House. Students were also taught the importance of knowing their address, phone number and how to report an emergency such as a fire. Some students were given the opportunity to make a mock 911 call inside the Fire Safety House to Pollema to practice reporting a fire.

The Sioux County Sheriff’s Office extends a special thanks to the firefighters from Hull and Boyden as well as John Heller, of the Orange City Fire Department, who assisted with the organization and set up of the Fire Safety House.