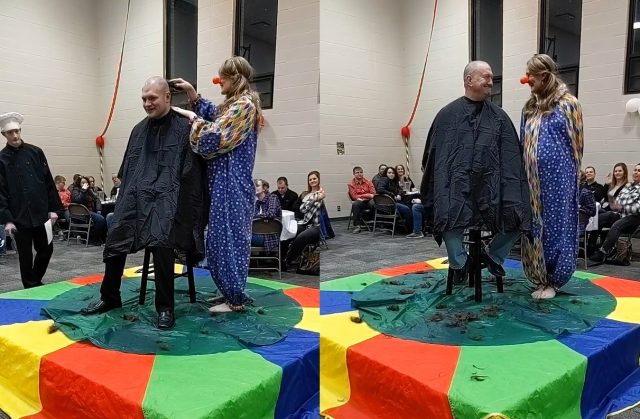 Sheldon, Iowa — A bunch of money was raised to help a youth mission trip to Texas — and two Sheldon United Methodist Church pastors are spending their first few days as bald men.

Sheldon UMC Youth Pastor Jacob Sandholm says that over past couple of months, they’ve been holding what they called their “Battle of the Bald” fundraiser. He says he and Senior Pastor Kevin Gingerich competed against each other.

Sandholm tells us the clipping was scheduled for the night of “Bella Notte,” which is the annual pre-Valentine’s Day Italian meal served by the youth. The theme this year was a carnival theme. It’s open to anyone who wants to buy a ticket.

He tells us in the end, there ended up being not one, but two shaved heads.

Sandholm says the itinerary is not “set in stone” yet, but he gives us an idea about how the mission trip will go.

See the video of the event on the Sheldon UMC Facebook Page: