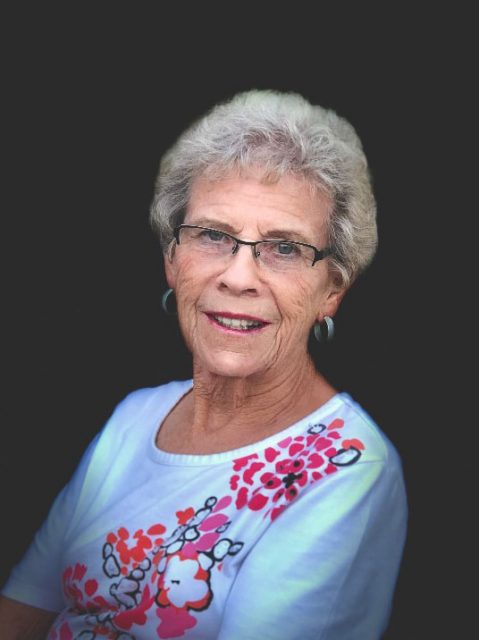 Mass of Christian Burial will be at 1:00 P.M. on Saturday, March 26 at St. Patrick Catholic Church in Sheldon, with Fr. Siby Punnoose officiating. A Celebration of Life will be held at the Eagles Club in Sheldon starting at 5pm, with dinner served.

Burial will be in St. Patrick Catholic Cemetery in Sheldon.

Visitation with the family present will be from 5:00 – 7:00 P.M. on Friday, March 25 at St. Patrick Catholic Church in Sheldon, with a Catholic Daughters of America Rosary Prayed at 5:00 P.M.

In lieu of flowers, please direct your gifts to St. Patrick’s Catholic School in Sheldon.

Arrangements are under the care of the Vander Ploeg Funeral Home – Sheldon. Online condolences may be left for the family at www.vanderploegfunerals.com

Jane Francis Elizabeth (Baack) Rohde was born November 22, 1935 in Remsen, IA to Raymond and Olivia (Wilberding) Baack and was born into eternal life on March 8, 2022 in Apache Junction, AZ at the age of 86 years and 4 months, surrounded by her loving family.

Jane was a proud member of the last graduating class of St. Joseph’s School, Le Mars, IA in 1953. After high school Jane took a job as a telephone operator and while eaves dropping on some calls heard about events going on at Westmar College which led to her meeting Leonard Rohde. They fell in love and were united in marriage on December 30, 1957, in Le Mars, IA. Within this union they were blessed with 5 children and Jane’s primary job was a homemaker and mother. Over the course of the first 5 years of their marriage the Rohde’s bounced around Northwest Iowa following Len’s teaching career opportunities before landing in their “home” of Sheldon, IA in 1962.

In 1976 Jane began working outside the home at Bill’s U-Market as a cashier. In 1981 Jane took a position as a teacher’s aide with Sheldon Community School District, a position which suited her caring and giving personality. She was in the teacher’s aide position until she retired in 1993. In 1995 they started snow birding to Apache Junction, AZ until present.

For those who knew Jane, know of her loving and caring nature that is evident in the many memberships and volunteer positions which included holding every office of the Catholic Daughters of America, performing every lay position (Lector, Eucharistic Minister, Song Leader and a member of the choir) at St. Patrick’s Catholic Church. Other memberships included St. Patrick’s Ladies Guild and Quilters, St. George’s Catholic Church (Apache Junction, AZ) Rosary builders and Cinnamon Roll bakers, St. George’s Guild, Red Hat Society both in Sheldon and Apache Junction, and Ladies of Sunrise RV Resort. Jane was also at the top of the list for all prayer chains as well as a volunteer at the Village Northwest Unlimited Treasure Chest.

Jane was an energizer bunny, very competitive, very active and was always on the move. She took to heart a fitness challenge that was introduced to the Sheldon faculty and spouses in the mid-1970’s. Jane was an avid walker, walking several miles daily until recently. Jane thoroughly enjoyed participating in Ladies and Couples bowling leagues, Ladies and Couples Golf leagues, Swinging Chicks and Ladies Bridge Club. She especially enjoyed Couples Bridge Club with other Sheldon educators and spouses which Len & Jane joined upon their arrival in Sheldon in 1962 and played until 2019 (58 years!). There were many couples that were a part of that “card club” however Len & Jane were blessed with the company of Bill & Carleen Kehrberg and Ray and Logene Anderson for the entirety of those 58 years. One of Jane’s proudest moments was when she was crowned Ladies Club Champion at the Sheldon Country Club and as evidence, she always had a copy of the newspaper article in her purse and was eager to show it to her children and grandchildren. Other activities that Jane enjoyed were making Rosaries, Saturday Sunrise Golf group, step off the pounds and water aerobics, and playing cards with anyone who wanted to get beat by her. She loved gathering for the Sunrise RV Resort Happy Hours and hosted many of them over the last 25 years. She very much enjoyed those as “Crazy Jane” (i.e., CJ) was all about having fun.

Jane was also very dedicated and proud of the fact that she gave blood every time she could. She gave many gallons of blood over her lifetime. The two things that Jane enjoyed the most was dancing with her husband Len and baking everyone in the family’s “favorite goodies”! Her cookies, brownies, caramel corn and scotcheroos were enjoyed by many!

Jane had a passion collecting pop tabs and bottle caps for the Ronald McDonald House. Please bring what you may have, and they will be collected and delivered in her honor.