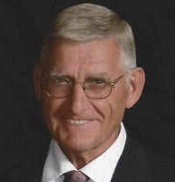 Funeral service will be 10:30 a.m. Saturday, September 17, 2022, at the Peace Lutheran Church in Rock Rapids, with Reverend Alex Sloter officiating.

A private burial with immediate family will take place following the service and other extended family and friends are invited to the Wulf residence, where a meal will be served.  Military honors will be presented by the Flessner American Legion Post No. 561 of Larchwood.

Visitation will be Friday, September 16th from 4:00 p.m. to 8:00 p.m. with family present at the Peace Lutheran Church in Rock Rapids.

Arrangements for Robert Wulf are in the care of the Jurrens Funeral Home of Larchwood, IA.

Robert Emil Wulf was born on November 20, 1942, in Stevens County, MN, the son of Emil Henry and Elizabeth (Moser) Wulf. He grew up in Larchwood and later graduated from West Lyon North High School. He enlisted in the U.S. Army and served from 1964 to 1966.

On May 6, 1967, he was united in marriage to Linda Lou Hinckley in Armour, South Dakota. To this union six children were born, Kelly, Kathy, Jason, Denise, Renee, and Heather.

Robert was a member of the English Lutheran Church in Larchwood. Robert enjoyed raising cattle, planting crops, fishing, running a Dozer, and especially loved being with his family.