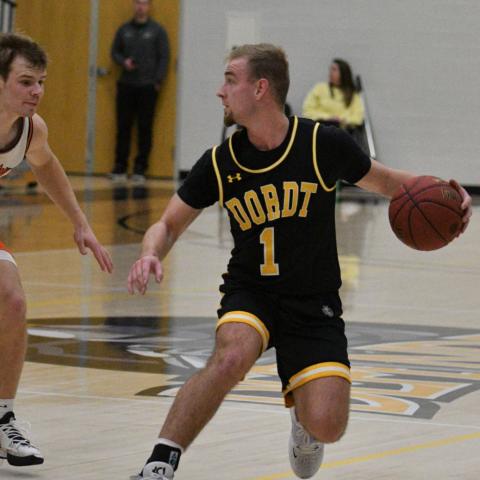 Dordt returns to action Saturday evening playing host to Briar Cliff. Tip off is set for 6:30.

The Chargers are 12-6 overall and 8-2 in the GPAC with losses to Dordt and Midland.  The loss to Midland came on December 11 and was the last time Briar Cliff has lost with the six game current winning streak.

Briar Cliff outscores teams 76-72 and convert 50 percent of its field goals and the Chargers are getting outrebounded 31-28.

The Defender men are 13-6 overall and 5-5 in the GPAC and have lost a pair of games since winning seven of eight from November 23-January 7.

Dordt outscores teams 84-72 and outrebound opponents 37-34.  The Defenders are making 51 percent of its field goals and limit teams to 43 percent field goal shooting.

The Chargers beat Jamestown 81-79 after trailing by 5-10 points much of the second half. Boerhave led a balanced scoring attack with 19 points and Kleinhesselink had 16 with Vesey and Vasa adding 12 points a piece.   Briar Cliff made 58 percent of its field goals and were outrebounded 29-22.

The Defenders were on the short end of an 82-80 decision on Wednesday night after trailing 42-34 at halftime.  Dordt bounced back after halftime to lead by eight but couldn’t maintain the lead. Coppock scored 26 and Bleeker had 19 with Ranking chipping in with 16.  Dordt made 29-58 field goals but were outrebounded 33-22.

Dordt beat Briar Cliff 74-73 on November 23 behind 22 points each from Vis and Coppock while Jackson Louscher had 11 for the Defenders. Boerhave added 21 and Vesey chipped in with 19 and made four three-point shots.