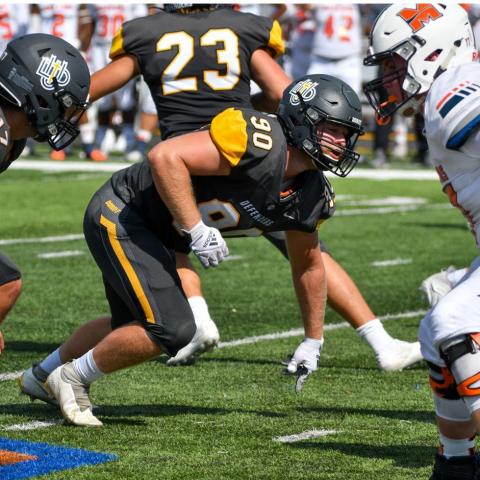 The Bulldogs are 1-1 this season with a 63-7 loss to Morningside to open the season and a 61-21 win over Briar Cliff.

Anthony Trojahn leads the team with 260 yards on 32 carries this season and has two scores. McDaniel ran for 101 yards last week on six carries and Nick Wellen has 14 rushes for 100 yards. Josh Bush and Carter Schiebout each have 63 and 58 yards.

Brett Zachman is 9-10 on point after tries and is 3-4 on field goals with a long of 41 this season. Blade Koons has punted eight times for 42 yards per punt.

The Defenders have eight sacks and are led by Drew Daum and Bryce Christian in that category with two each. Four different Defenders, Jalen Placide, Nathan Kabongo, Grant Hixson and Meno Jones each have one interception. Brayton Van Kekerix is the leading tackler with 10 solo and four assisted stops while Placide and Daum have eight and seven solo tackles each. Christian, Tanner Millikan and Abe Stoesz all have six solo tackles.

Dordt is scheduled to travel to Doane to face the Tigers in a 1:00 kickoff on September 25.