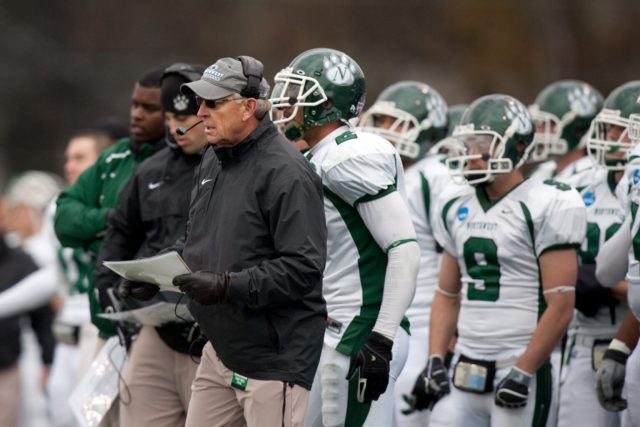 San Antonio, Texas — Former Austin College and Northwest Missouri State University head coach Mel Tjeerdsma will receive the AFCA’s 2022 Amos Alonzo Stagg Award. The award is given to those “whose services have been outstanding in the advancement of the best interests in football,” and will be presented during the 2022 AFCA Convention in San Antonio, Texas.

In 27 years as a head coach, Tjeerdsma stocked up an outstanding record of 242-82-4. His 242 wins is 10th all-time among Division II head coaches and he boasts a 74.4 winning percentage. Tjeerdsma’s coaching career began at Sioux Center (Iowa) High School. In 1972, he won the first Class 2A State football championship. Tjeerdsma earned Northwest Iowa Football Coach of the Year honors that season. In 1976, Tjeerdsma took his coaching to the next level and became offensive coordinator at Northwestern College in Orange City, Iowa. While at Northwestern (Iowa), the team had four trips to the NAIA Division II Playoffs and won a national championship in 1983.

From 1984 to 1993, Tjeerdsma was the head coach for Austin College. He compiled a record of 59–39–4 to become the winningest coach in program history. He took the team to three Texas Intercollegiate Athletic Association championships in 1984, 1985 and 1988, and made two trips to the NAIA Division II playoffs.

Tjeerdsma moved on to Northwest Missouri State in 1994. In just three years, Tjeerdsma took the program from 0-11 to 11-2, making their first playoff appearance since 1984. Two years after that playoff appearance, he guided the Bearcats to a 15-0 record and the 1998 NCAA Division II National Championship. It was the first national title ever won by the Bearcats in any sport. Northwest Missouri State would add a second straight title in 1999 and would go on to play in five more national championship games, winning a third title in 2009. Tjeerdsma won 183 games at Northwest Missouri State, marking the second time in his career he would become the all-time wins leader for a program. In 2007, the field at Bearcat Stadium was named Mel Tjeerdsma Field in the coach’s honor. He retired from coaching after the 2010 season.

Tjeerdsma was named AFCA Division II Coach of the Year four times (1998, 1999, 2008, 2009) and was a seven-time AFCA Regional Coach of the Year winner. In 2011, he led the United States national team to a title in the International Federation of American Football (IFAF) World Cup. Tjeerdsma returned to Austin College after retiring from coaching and worked in the Institutional Advancement Division. In 2013, he became athletic director at Northwest Missouri State University, a post he would hold for five years.

A dedicated member of the AFCA, Tjeerdsma worked and chaired on many committees. He served on the AFCA Board of Trustees for eight years, culminating as president of the association in 2006. Tjeerdsma is a member of the NCAA Division II Football, Mid-America Intercollegiate Athletics Association, State of Missouri Sports, State of South Dakota Sports and Northwest Missouri State’s M-Club halls of fame. In 2018, he was inducted into the College Football Hall of Fame.

The Amos Alonzo Stagg Award is given to the “individual, group or institution whose services have been outstanding in the advancement of the best interests of football.” Its purpose is “to perpetuate the example and influence of Amos Alonzo Stagg.”

The award is named in honor of a man who was instrumental in founding the AFCA in the 1920s. He is considered one of the great innovators and motivating forces in the early development of the game of football. The plaque given to each recipient is a replica of the one given to Stagg at the 1939 AFCA Convention in tribute to his 50 years of service to football.

Amos Alonzo Stagg began his coaching career at the School of Christian Workers, now Springfield (Mass.) College, after graduating from Yale University in 1888.

Stagg also served as head coach at Chicago (1892-1932) and College of the Pacific (1933-1946). His 41 seasons at Chicago is one of the longest head coaching tenures in the history of the college game.

Among the innovations credited to Stagg are the tackling dummy, the huddle, the reverse play, man in motion, knit pants, numbering plays and players, and the awarding of letters.

A long-time AFCA member, Stagg was the Association’s 1943 Coach of the Year.