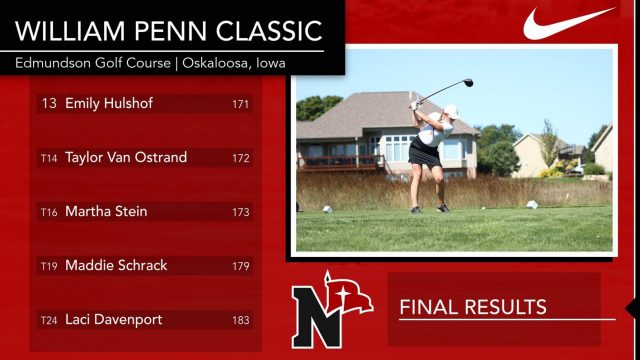 OSKALOOSA, Iowa — The Northwestern College women’s golf team took home a fourth-place finish at the William Penn Classic after top-15 performances from Emily Hulshof (Fr., Ireton, Iowa/West Sioux) and Taylor Van Ostrand (So., Lincoln, Neb./Lincoln Christian). Three Raiders sat within one stroke of each other by the end of the tournament.

“I am very proud of how the girls played over the course of the last two days! We have never been to this course and we had little information about it going into Day 1. The first day we had two personal bests out of Emily and Laci! I was very excited for those two. I knew they were capable of it, they just had to get into the groove and it finally happened! We finished Day 1, four strokes behind Briar Cliff who we always seem to be chasing,” said head coach Courtney Den Herder.

Day 2 saw Hulshof and Van Ostrand both shoot an 87 (+16), struggling a bit more than the first round, but remaining squarely inside the top-15. Hulshof finished 13th and Van Ostrand finished tied for 14th.

“On Day 2 we had another personal best! Martha came out and shot an 82 after shooting 90 Day 1. I love the fight she has and even with a couple bad holes she doesn’t get down on herself and keeps going! A 3rd place finish with some tough teams in the field is very encouraging for our team! We are young and I’m excited to see what the girls can continue to do,” noted Den Herder.

Up Next: The Raiders will compete in the one-day College of St. Mary tournament in Omaha, Neb. on Tuesday, September 21 before heading into the fall portion of the Great Plains Athletic Conference (GPAC) Championships set for Monday, October 4 and Tuesday, October 5 at the Bluffs Golf Course in Vermillion, S.D.