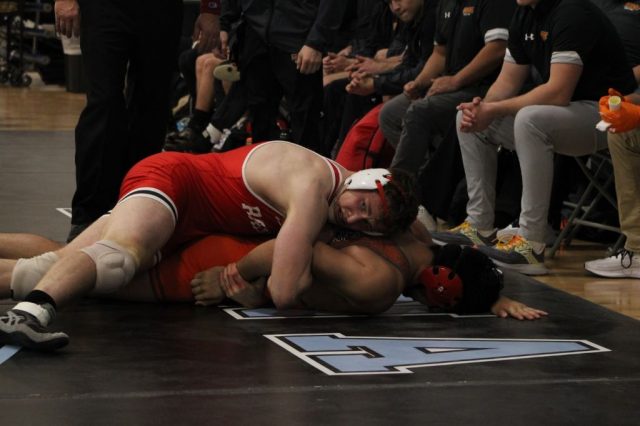 MARSHALL, Mo. — The (RV) Northwestern College wrestling team competed at the Missouri Valley Invite on Friday and Saturday, January 21-22. The Raiders were highlighted by a third-place finish by the No. 19-ranked 184-pound wrestler Luke Jenness.

DAY ONE RECAP
“Friday was a good day for us. We have been riding a high for a few weeks and this tournament is good at revealing some deficiencies,” noted head coach Rik Dahl. “We had moments of great promise and at other times we needed to be a little more resilient and determined.”

After an opening round bye in the 125-pound bracket, sophomore Sean Heeney (Sioux City, Iowa/East) picked up a fall victory (2:04) over Vanguard University (Ky.) freshman Andrew Vogeler. He would fall in the Round of Sixteen to No. 13-ranked 125-pounder in the NAIA, Riley Siason out of Menlo College (Calif.), in a 11-3 major decision.

Jenness (So., Primghar, Iowa/Sheldon), ranked No. 19 at 184 pounds in the latest National Association of Intercollegiate Athletics (NAIA) individual rankings, picked up the second Raider fall victory of the day over Vanguard University’s (Calif.) Juan Zapien. In the round of 16, the sophomore collected the 6-0 decision over Missouri Valley sophomore Donovan McElligott. Late Friday night, Jenness battled Arizona Christian’s Christia Cornes, prevailing with a 4-1 decision to advance to the semifinals on Saturday.

“Luke wrestled like a madman on Friday, chalking up three hard fought battles,” said Dahl. “His consistency and focus are fun to coach and watch!”

After falling in his second bout in the championship bracket, Heeney picks up the first period fall over Nicholas Stringer of Simpson University (Calif.) to stay alive in the consolation bracket.

“Overall, I felt like we went out attacking, but we need to keep that temp for seven minutes. Friday night was rough for us,” commented Dahl. “In the finals all around we lost four matches when we were winning and in control and then lost the position war and got pinned. Those are big things we need to address. The good news is we have time to address it and a team ready to make adjustments.”

DAY TWO RECAP
Jenness battled No. 9-ranked Michael Gibson of Life University (Ga.) in the semifinals to start Day Two at the Missouri Valley Invite. Despite putting up a valiant effort against a top-10 ranked opponent, the sophomore would fall in an 11-4 decision.

In his first consolation bout of the invite, Jenness would bounce back with a fall (1:28) victory over Baker University’s (Kan.) Brett Bober to advance to the third-place match. In a hard-fought battle for third-place against No. 11-ranked Niko Perovic of Williams Baptist (Ark.) with an 8-5 decision.

Three Raiders would advance to the fifth round of the consolation bracket in Heeney (125), Eddy Punzalan (157), and Pomajzl (165). Heeney picked up a fall (0:00) victory over Nicholas Stringer of Simpson (Calif.) before falling in a tough 8-6 decision to Harley Williamson of York (Neb.).

Punzalan (Fr., Weston, Fla./Cypress Bay) picked up a 13-9 decision over Briar Cliff’s Garrett Arment, before falling to Brent Hudgins of Midway University (Ky.) in a 14-8 decision.

Pomajzl picked up two consolation round victories to advance to the fifth round. He took a major decision victory over Invi Bella (Graceland (Iowa)) and a tech fall win (15-0) over Tyler Cabral of Southeastern (Fla.).

Up Next: Northwestern will return to action on Wednesday, January 26 when they travel to Sioux City for a Great Plains Athletic Conference (GPAC) dual with the Morningside Mustangs (3-1, 3-1 GPAC) with the first bout slated for 7:00 p.m.