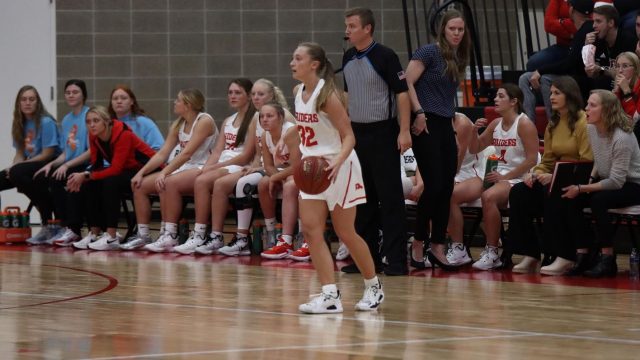 “Great win for our team tonight,” noted Head Coach Kristin Rotert. “I thought we handled the pace of the game really well and executed on both ends. We shot the ball really well and did a great job of making the extra pass and finding open shooters. Really proud of our composure down the stretch.”

From the opening tip the pace of this top-20 matchup was frenetic. Kemble got off to a fast start in the first quarter hitting three first quarter threes to help the Raiders keep pace with the hot shooting Chargers. Northwestern would jump out to a 12-6 lead but the Chargers would close the gap to two by the end of the first period 21-19.

The second period of play would see the Raider’s defense cool off the hot start from the Chargers. The pace of play would continue and after a three by Jada Cunningham (Sr., Sioux Falls, S.D./Washington) the Raiders stretched their lead to 10 with just over three minutes left in the quarter. The teams traded a few buckets and Northwestern took a 38-30 lead into the break.

Coming out of the halftime break the Raiders would continue to keep the Chargers at arm’s length but a quick 9-0 run by Briar Cliff would pull them within two of the No. 12-ranked Raiders. The Raiders would respond with a 6-0 run of their own to stretch the lead back out to six going into the final quarter.

The final period of play would prove to be an entertaining one. The back-and-forth action would continue and an opening made jumper by Briar Cliff would pull them within four but that would be as close as the Chargers would get. The Raiders would execute down the stretch and make 6-8 free throws during the final frame to keep the lead in their hands sealing the win.

Kemble paced the Raiders with 18 points and going a perfect 6-6 from the field and 2-2 from the line. Molly Schany (So., Emmetsburg, Iowa/Emmetsburg) finished with a quiet 14 points and seven rebounds. Taylor VanderVelde (Sr., Sioux Falls, S.D./Washington) finished with seven rebounds and three assists to go with an efficient 13 points on 5-6 from the field. Cunningham shared point guard duties with Maddie Jones (Jr., Twin Lakes, Iowa/South Central Calhoun) as the Raiders faced pressure all night and they finished with seven and five assists respectively. Cunningham also finished with an impressive five steals. Freshman Maren Nerem (Edgerton, Minn./Southwest Minnesota Christian) provided a lift off the Raider bench scoring seven points.

Up Next: The Raiders will travel to Concordia University in Seward, Neb. to take on the No. 25-ranked Bulldogs on Saturday, Dec. 4 at 2:00 p.m.