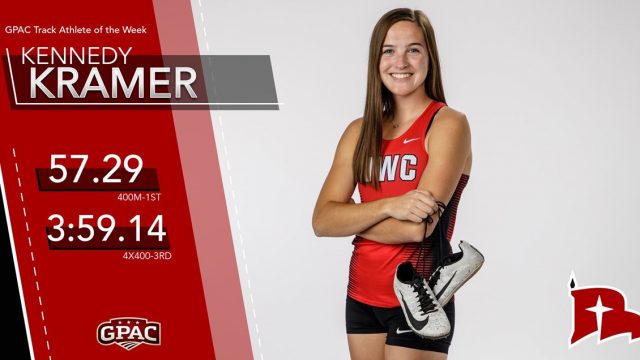 The Raiders competed at the South Dakota State University (SDSU) DII Invite this past Friday in Brookings, S.D. Kramer (Fr., Larchwood, Iowa/West Lyon) continues to make a name for herself this season, continually posting top times and placements against tough competition in the 400m. In a field packed with National Collegiate Athletic Association (NCAA) Division II athletes, the freshman topped all of them with a first-place time of 57.29 on SDSU’s 300m indoor track.

Her 57.29 mark alone sits sixth in the NAIA this season, but her best time of the year was her 57.57 time at the Dordt Indoor Invite, which sits third in the nation (converted time of 56.82). She is one of four National Association of Intercollegiate Athletics (NAIA) athletes to have a 400m time under 57 seconds this season.

The Larchwood, Iowa native also anchored the Raiders’ 4×400 meter relay team that ran to a third-place finish with a time of 3:59.14.

On the event, the Raiders left Brookings with a third-place finish with 50 team points, the highest finishing NAIA team at the event.