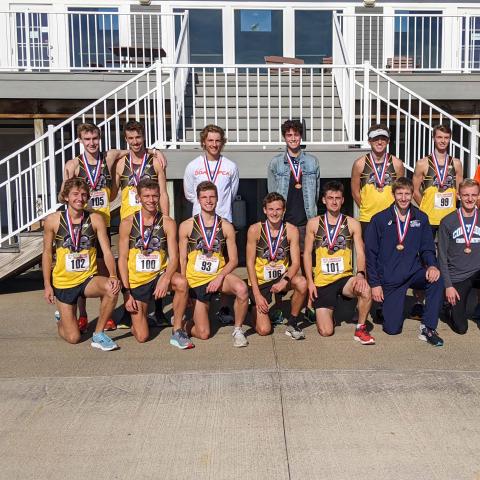 Sioux Center, Iowa — Postseason honors continue to pour in for the Dordt University men’s cross country team as nine runners were named to the 2021 all-conference team. Athletes who finish in the top 15 at the conference championship garner the all-league honor.

“Having nine men finish in the top fifteen individuals is an incredible feat at a championship race,” said Dordt University Head Coach Nate Wolf. “The Defender men packed up early and moved together throughout the race pushing each other to outstanding individual and collective performances. Davis Tebben earning his first collegiate cross country win and being crowned conference champion is illustrative of how the men’s team trains together and races together. There were several men that had similar championship type performances come out of the meet.”

Davis Tebben headlines the list by winning the GPAC Individual title last weekend, completing the 8K course in a time of 25:52. Tebben has earned all-conference honors three times, finishing second in 2020 and seventh in 2018.

Jacob Vander Plaats finished as the GPAC runner-up with a time of 26:04 and is now a four-time all-conference runner. Vander Plaats placed second in 2019, sixth in 2018 and seventh in 2017.

Eric Steiger placed third overall (26:08) and earns the postseason honor for the fourth time. Steiger finished eighth last season, was the GPAC runner-up in 2019 and won the individual champion in 2018.

Ethan Summerhays earned all-conference honors for the first time, finishing sixth with a time of 26:26.

Brooks DeWaard was the seventh Defender runner to finish among the top 15, crossing the finish line in ninth place with a time of 26:56. DeWaard is a three-time all-conference runner, placing 14th in 2020 and sixth in 2019.

Peter Shippy (14th) turned in an 8K time of 27:09 and also earns the postseason honor for the first time.

Dordt won the GPAC title for the fourth straight time with a perfect score of 15 points.