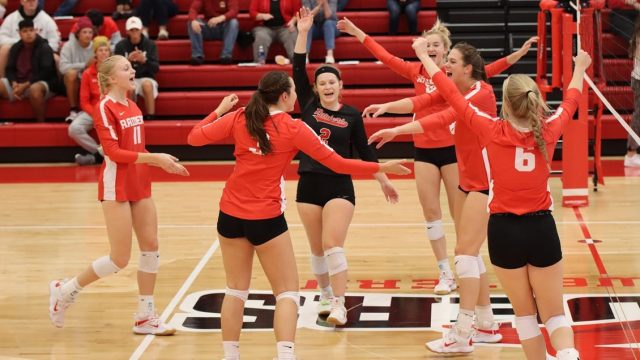 Slugging off a slow start, the Northwestern squad would not allow the Lancers to get to 20 points in any of the sets this afternoon, holding them to 17, 13, 13 respectively. Defense played a huge part of that stymied Lancer offense, as the Raiders tallied 14 team blocks. Bekah Horstman (Sr., Pella, Iowa/Pella Christian) led the team with six kills, all block assists.

The Raiders controlled every aspect of the contest this fall break afternoon on the campus of Northwestern College. Northwestern, as a team, hit a tremendous .338 to Mount Marty’s .039 – racking up 31 kills in the three sets played.

The Lancers got off to a hot start in the opening set, opening the match with an early 7-2 advantage. A quick time out from head coach Kyle Van Den Bosch sparked a 10-1 run to give Northwestern their first lead at 11-8 and they would not hand it back. The Raiders would go on to take the set 25-17 thanks to a final 3-0 spurt to close out the set.

The second set was more of the Raiders building confidence and swinging confidently. It started with a reverse of the script compared to the opening set, Northwestern jumping out to a 7-2 lead forcing Mount Marty to take a time out. Out of the timeout, it was back-and-forth before the Raiders went on 7-0 run to take total control of the set at 17-6. The Raiders would ultimately prevail 25-13 to take the 2-0 match lead.

The final set saw more of the same from set two, the Raiders never lifting their foot from the pedal. Freshman Emmy Wedgbury (Cedar Falls, Iowa/Cedar Falls) led a 6-0 Raider surge to force a time out but that would be all Northwestern would need. Another 5-0 run would allow the Raiders to take the match in three sets, winning set three 25-13.

Up Next: Northwestern hits the road for a three-game road trip, starting a stretch of three games in five days starting with the season finale against Briar Cliff Chargers (7-14, 1-9 GPAC) on Tuesday, Oct. 19 in Sioux City, Iowa. First serve scheduled for 7:30 p.m.