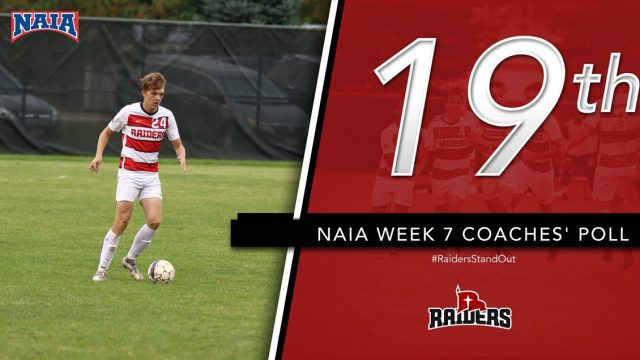 KANSAS CITY, Mo. – The Northwestern College men’s soccer team (12-1-1, 8-0 GPAC) continues to make program history this week by being ranked inside the top-20 for the first time. The Raiders check-in at No. 19 in this week’s National Association of Intercollegiate Athletics (NAIA), the national office announced this morning.

The Raiders enter this week’s poll on an eight-game win streak, all in league play to sit atop the conference standings heading into the final two weeks of the regular season. In the span of the win streak, Northwestern has outscored their opponents 23-4.

The last time out for the Raiders was a dominant 6-1 victory over arch-rival the Defenders of Dordt University, having this past Saturday off from competition.

Junior goalkeeper and three-time GPAC Defensive Player of the Week Ezekiel Foltz (Sioux Center, Iowa/Sioux Center) has picked up all 12 wins in the net on the season, while tallying 56 saves on the year. He has a save percentage of .875.

For the third-consecutive poll, the Raiders are the only Great Plains Athletic Conference (GPAC) team represented in the rankings.