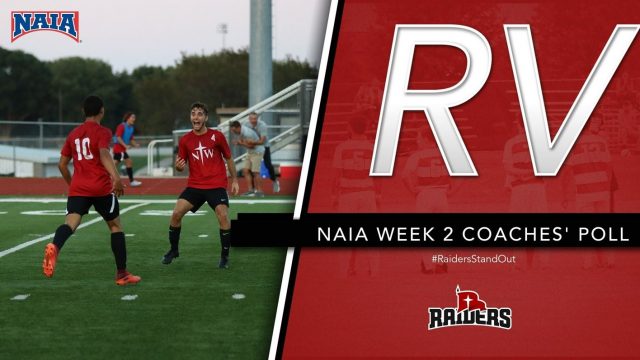 The only loss of the season so far for the Raiders came to a solid William Penn team who also is receiving votes in this week’s poll, checking in with 21 votes. The Raiders were able to bounce back after the loss to WPU and defeated York (Neb.) 1-0 on Sept. 8.

In 465 minutes in the net so far this season, junior keeper Ezekiel Foltz (Sioux Center, Iowa/Sioux Center) has only allowed five goals and tallied 18 saves to help the Raiders jump out to a 4-1 start this season. Juan Mackrey (Sr., Balcare, Argentina/Georgia Military College) leads the squad in both goals scored (4) and points (8), while Ryan Wager (Sr., Huron, S.D./James Valley Christian) has also scored multiple goals (2) for the Raiders. Brennan Haggerty (Sr., Freeman, S.D./Freeman Academy) is leading the team in assists with two.

The (RV) Raiders are back in action this evening as they travel to battle Waldorf University in Forest City, Iowa with kickoff set for 5:30 p.m.