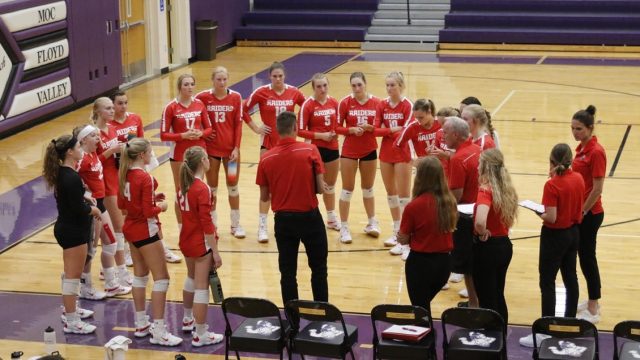 The tough league play in the GPAC has gotten to the young Raiders squad of late, dropping their second straight match to a GPAC opponent either ranked or receiving votes. On the match, the Raiders hitting percentage sat below .200 (.178). As a team, Northwestern only picked up 32 kills to Dakota Wesleyan’s 42 kills.

The first set was a battle, falling 25-23 to a tough Tigers squad. It was their best set of the night from the attacking perspective with a .448 percentage.

The second set, Northwestern came out flat, falling 25-15. The Raiders struggled mightily on the attack front in the set. The Tigers jumped out to a 6-1 lead and, eventually, extended that lead to 14-3. They would never look back in the set to take complete control of the set and match.

The third set the Raiders came out strong, building a 16-11 lead before the Tigers tore off a 5-0 run to tie the set, and take over all the momentum needed to close out the match.

Up Next: The Raiders will wrap non-conference play for the season with a trip to Wisconsin to face No. 3-ranked Viterbo and Lincoln Christian in La Crosse, Wis. this Saturday, September 18. First serve against Viterbo set for noon, with the match against Lincoln Christian set to follow right after.