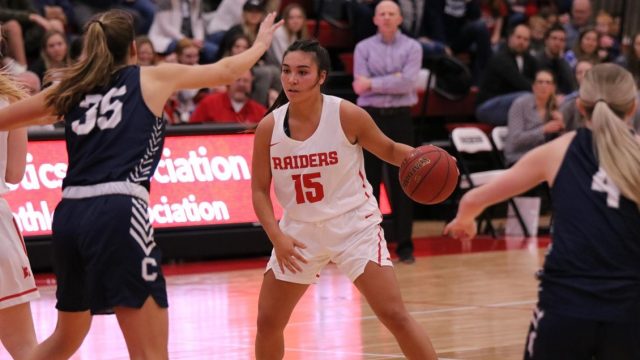 “Great effort and win by our team tonight,” said head coach Kristin Rotert. “I thought we competed hard on the defensive end and made some big plays down the stretch!”

The Raider defense came to play this afternoon as the Raiders were keen to avenge their December 4 overtime loss to the Concordia Bulldogs, solidifying their second-place position within the Great Plains Athletic Conference (GPAC) standings. Northwestern held the Bulldogs under their season average in both field goal percentage (39.1%) and points (68) en route to evening the season series.

The two opened the game feeling each other out but it was Northwestern who consistently held the lead. Late in the first quarter, Northwestern would open up a seven-point lead thanks to a 9-2 run to end the quarter, leading 17-10 after one. The Raiders held the Bulldogs to a mere 26.7% from the field in the opening quarter.

The Raiders would open the second quarter extending their run to 13-2 thanks to an Emilee Danner (Jr., Westside, Iowa/Ar-We-Va) lay-up and a Vander Velde (Sr., Sioux Falls, S.D./Washington) jumper, forcing a Concordia time out as the Raiders opened what would be their largest lead of the game at 11 (21-10). With the Raiders leading 28-17 with six minutes left in the half, the Bulldogs would go on an 8-0 run to cut the Northwestern lead to three at 28-25. Concordia would cut that lead down to one with a minute to go in the half, but Northwestern would take a 32-30 lead into the locker room.

VanderVelde had a phenomenal first half, scoring 10 points and dropping eight points in the first twenty minutes of game action. Schany (So., Emmetsburg, Iowa/Emmetsburg) had eight points and five rebounds, while Danner grabbed six rebounds.

In the third quarter, Concordia would knot the game at 40-40 with six minutes on the clock, but a four-point stretch from Devyn Kemble (Sr., Panora, Iowa/Panorama) would keep the Bulldogs at arm’s length, giving the Raiders a 44-40 advantage. Midway through the frame, Northwestern would go on a stretch of making six-of-seven field goals as they would build their lead back up to eight with under two minutes in the corner.

Concordia would keep the game close throughout the final frame, making their final push with six minutes to go, tying the game at 62-62. Zoe Heemstra (Jr., Orange City, Iowa/MOC-Floyd Valley) would knock down a jumper to give the Raiders the lead again and they would not look back. In the final frame, Northwestern shot 8-for-14 from the free throw line and it was enough to hold off the Bulldogs, as the Raiders would take the game 74-68.

Schany notched her fourth double-double of the season with 14 points and 10 rebounds, shooting 6-for-9 from the floor. VanderVelde recorded her second double-double of the season (16 points, 13 rebounds), shooting 5-for-8 from the floor and 5-for-6 from the charity strike. Maddie Jones (Jr., Twin Lakes, Iowa/South Central Calhoun) also scored in double digits with 10 points, also recording a game-high six assists. Kemble was the fourth Raider in double figures with her 14 points, and Jada Cunningham (Sr., Sioux Falls, S.D./Washington) notched five assists.

“I thought our team was very committed to rebounding tonight, with Taylor, Molly, and Emilee leading the way,” noted Rotert. “They helped us hold Concordia to just one shot all night, which allowed us to get out and run in transition.”

The Bulldogs never held a lead in the game this afternoon, though the game was tied seven different times. The Raider defense crashed the boards hard, holding a +11 in the rebounding margin (46-35). Northwestern grabbed nine offensive rebounds, scoring 14 second chance points in the victory.