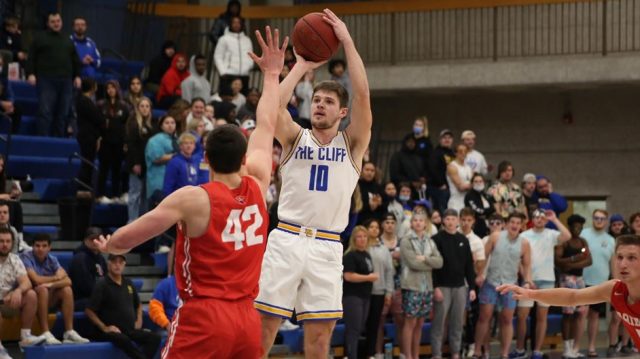 Vesey got the Chargers going early with back-to-back 3-pointers to open the contest. With the score tied 12-12 five minutes into the game, the Chargers erupted for an 18-2 over the next seven minutes to take a 32-14 lead. Jaden Kleinhesselink and Matthew Stilwill each scored six points and the team went 8-for-10 from the field during the run.

A Kleinhesselink bucket gave BC their largest lead of the night 37-17 with 5:43 remaining in the half. Trent Hilbrands knocked down a NWC 3-pointer to pull within 15 points, but after a Stilwill bucket the Chargers held a 44-27 lead at halftime.

Briar Cliff shot a phenomenal 59.3% from the field in the first half, as they would take the 44-27 lead into the break.

Hilbrands (Sr., Remsen, Iowa/Le Mars Community) would knock down four 3-point baskets in the first half, to lead the Raiders in scoring in the first half with 12. Van Kalsbeek (So., Orange City, Iowa/MOC-Floyd Valley) had eight points. Matt Onken (R-So., Marshall, Minn./Marshall) grabbed four rebounds to lead the team.

Kleinhesselink lead the Cliff with 13 first half points.

A 5-0 swing early in the second half for the Raiders as the comeback attempt was on. Back-to-back 3-pointers from Noah Slagter (Sr., Willmar, Minn./Willmar) and Hilbrands would cut the Charger deficit down to single digits, 48-40. Hilbrands would stay hot and hit yet another three, as the Raiders continued to chip into the deficit. Briar Cliff would take a time out leading 54-45 with 13 minutes left in the game.

Out of the break, Briar Cliff built their lead back up to 13, as the Raiders would take a time out trailing 60-47. A Slagter 3-pointer would ignite another small Northwestern spurt, as Van Kalsbeek would cut the Charger lead down to 10 with eight minutes on the clock.

Yet again, the Raider would attempt to cut into the lead, bringing it to within nine with 2:25 remaining, 76-67. However, the Chargers would keep each Raider rally attempt at arm’s length as Briar Cliff would prevail 81-69.

Both Hilbrands and Van Kalsbeek dropped 20+ points in the contest. Hilbrands would lead all scorer’s with 25 points on the night, hitting seven 3-pointers. Van Kalsbeek tallied 20 points and eight rebounds in the effort. Slagter would be the third Raider in double digits with 10 points and a team-high three assists.