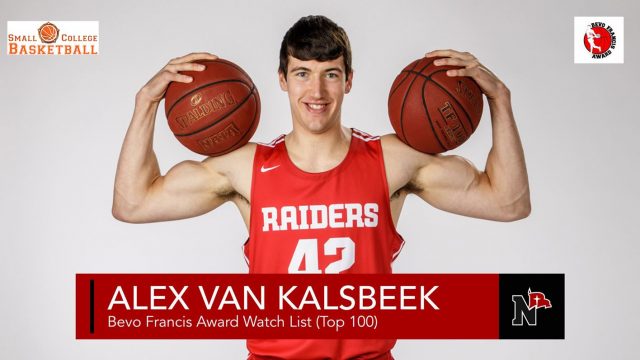 Per SCB, “The Clarence “Bevo” Francis Award is presented annually to the player who has had the finest overall season within Small College Basketball. Considerations will be season statistics and individual achievements, awards, personal character and team achievements. This is an incredibly prestigious award, as this award will only be given to one player within Small College Basketball per season. 2022 marks the sixth year of the Bevo Francis Award, after the award was not presented in 2021.”

In 21 games this season, Van Kalsbeek (So., Orange City, Iowa/MOC Floyd Valley) is averaging 21.4 points and 7.7 rebounds per game, both marks leading the team. He’s shooting 64.6% from the floor and 75.6% from the free throw line. Last week, he was named Great Plains Athletic Conference (GPAC) Men’s Basketball Player of the Week – the second of his career. Averaging a double-double in the week also led him to earning National Association of Intercollegiate Athletics (NAIA) National Men’s Basketball player of the Week honor, while also becoming the 49th Raider in program history to notch 1,000 career points.