Visitation will be Sunday, September 16th from 5:00 to 8:00 PM, with the family present at the Jurrens Funeral Home of Rock Rapids, IA.

Funeral service will be 10:30 a.m. Saturday, September 15, 2012 at the Trinity Lutheran Church in Sibley, with Reverend James Berka officiating. Burial will follow in the Pleasant view Cemetery in Little Rock, IA.

Visitation will be Friday, September 14th from 2-8 p.m. with the family present from 6-8 p.m. at the Trinity Lutheran Church in Sibley. The Jurrens Funeral Home of Sibley is handling arrangements.

Memorial Services will be Friday, September 14, 2012 at 10:30 A.M. at the Andringa Funeral Home Sheldon Funeral Service in Sheldon. Pastor Craig Nissen officiating.  Burial of the cremated remains will be at the Gilman Township Cemetery in Ashton, Iowa, following the Memorial Service.

Friends and Family may visit with the family prior to the Memorial Service from 9:00 to 10:15 A.M. at the Andringa Funeral Home Sheldon Funeral Service in Sheldon.

Mrs. Helen Eldridge, age 90, of Orange City, passed away on Thursday, September 6, 2012, at the Bickford Cottage in Sioux City.

Visitation with the family will be the hour before the service on Monday at the church.

Arrangements are with the Oolman Funeral Home in Orange City.

There will be a funeral service on Saturday, September 8, at 10:30 a.m., at the American Reformed Church in Hull.  The Rev. Steven Bierly will officiate.

Interment will follow at the Hope Cemetery in Hull.  Visitation will be after 5:00pm on Friday, with the family present from 6:00pm to 8:00pm, at the Oolman Funeral Home in Hull. 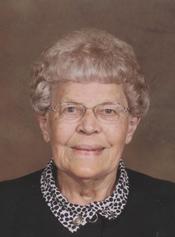 On May 1, 1943 Vera was united in marriage to William “Bill” De Beer in North Carolina. While Bill was stationed in the U.S. Army Vera was employed by Merrill Pioneer Hospital as a laundress. She remained there for thirty years. Vera was an active member of the First Reformed Church. She was a willing volunteer and member of the Ladies Circle and RCWM. In April of 2000 Vera’s husband, Bill died after 57 years of marriage. Vera remained active through the years with church events and other community activities. She enjoyed visiting with friends and family over a cup of coffee. On May 27, 2007, Vera became a resident of Lyon Manor Nursing and Rehabilitation Center in Rock Rapids, IA. This past Monday, September 03, 2012 Vera died there at the age of ninety-two.

Preceding Vera in death were her parents, husband, Bill and two brothers, Verdus and Vernon Wiertzema.

Blessed be the memory of Vera De Beer.