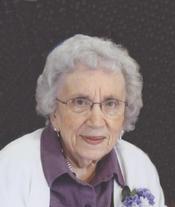 Funeral service will be 10:30 AM, Monday, January 28th at First Reformed Church in Sibley, IA, with Reverend Bruce Wilterdink officiating. Burial will follow at Holman Township Cemetery in Sibley.

Funeral service will be 10:00 AM, Saturday Jan. 26th at the Apostolic Christian Church in Lester, Iowa. Burial will follow at the church cemetery.

Emma Friedricka Knobloch was born August 27, 1915 at the family farm near Alvord, Iowa, the daughter of Dietrich and Julia (Koch) Knobloch. She attended Cleveland Township School through the 8th grade. After her education she did domestic work for several families in Lyon County, Iowa. In the early 1930’s she moved to Peoria, IL to do domestic work with the Triebel family. On December 29, 1935 she was baptized at Princeville, IL. She remained with the Triebel family for 50 years. Emma moved back to Iowa in 1979 to be near family. In 2010 Emma entered the Lyon Manor Nursing & Rehab Center in Rock Rapids, IA.

She was a member of the Apostolic Christian Church in Lester, IA. She enjoyed quilting, crocheting, and handiwork. She was an excellent cook and her family enjoyed her baking.

This past Tuesday, January 22, 2013 Emma died at the Lyon Manor Nursing Home in Rock Rapids at the age of 97.

She was preceded in death by her parents, Dietrich and Julia Knobloch; four sisters, Julia, Elizabeth, Lydia and Emelie; and five brothers, Ernst, Albert, Dietrich, Benjamin and Earl.

A funeral service will be held on Saturday, January 26th at 10:30 a.m. at the American Lutheran Church in Melvin, IA.  Pastor Judy Johnson will be officiating.

Visitation will be held prior to the service on Saturday, January 26th from 9:30 a.m. to 10:30 a.m. at the American Lutheran Church in Melvin with the family present at that time. Burial will be held at Baker Township Cemetery in Melvin.

The Sanborn Funeral Home is in charge of the arrangements for 92 year-old Lois Luton of Sanborn.

Funeral service will be 10:00 AM, Saturday, Jan. 26th, at the Reformed Church of Steen, MN, with Pastor Mike Altena officiating.  Burial will follow at East Side Cemetery in Steen.

Online memorial condolences may be left at www.jurrensfuneralhome.com.

There will be funeral service on Thursday, January 24, at 10:00am, at the Newkirk Reformed Church in rural Hospers. The Rev. David Powers will officiate. Interment will follow at the Newkirk Cemetery.

Visitation will be after 4:00pm on Wednesday, with the family present from 5:00pm to 7:00pm, at the Oolman Funeral Home in Orange City.