There will be a funeral service on Saturday, November 17, at 10:00am, at the First Reformed Church in Orange City. The Rev. Mark Haverdink will officiate. Interment will follow at the West Lawn Cemetery in Orange City.

Visitation will be after 4:00pm on Friday, with the family present from 6:00pm to 8:00pm, at the Oolman Funeral Home in Orange City.

Julia Kay was born on June 26, 1944, in Lehigh, Iowa, the daughter of Harold and Margaret (Smith) Aringdale. She was raised in Marathon.

On December 8, 1963, she married Paul Mc Gee. They lived most of their married life in Cherokee. She was hard working, until Parkinson Disease took over in 2007. In October of 2008, she became a resident of the Heritage House.

Julie was a member of the Meriden Evangelical Free Church, where she helped lead the AWANA group. She will be remembered for her faith in God, for her selfless giving and caring, and for her beautiful smile.

Besides being a homemaker, she had her own Home Interiors business for ten years, with her business card stating, “Have hammer, will travel.” She earned the title of queen of her division for northwest Iowa many times. Through this work, she got to know many women in the area.

Mrs. McGee had a green thumb and always had a garden and large flower beds. She enjoyed volunteering with the Boy Scouts and Girl Scouts.

She was a vibrant, outgoing person, who was devoted to her family, loving every second she spent with her grandchildren.

Survivors include her former husband and his wife, Paul and Dorothy Mc Gee, of Cherokee; a son and his wife, Troy and Tracy Mc Gee, of West Des Moines, a daughter and her husband, Tonya and Daniel Venema, of Orange City; and five grandchildren, Gabe and Mason Mc Gee, and Cara, Brooke, and Cole Venema.

In addition to her parents, she was preceded in death by a brother, Duane Aringdale; and a sister, Jan Schmillen.

Memorials will be directed to the future Prairie Ridge Care Center in Orange City.

There will be a funeral service on Thursday, November 15, at 9:30am, at the Immanuel Christian Reformed Church in Orange City.  The Rev. Donald Lenderink and the Rev. Robert De Boer will officiate.  Interment will follow at the West Lawn Cemetery in Orange City.

Visitation will be after 5:00pm Wednesday, with the family present from 5:00pm to 7:00pm, at the Oolman Funeral Home in Orange City.

Funeral Service will be Thursday, Nov. 15, 2012 at 10:30 a.m. from St. Mary Catholic Church in Alton, IA with Rev. Terry Roder officiating. Burial will be in the parish cemetery. Visitation will be anytime after 4 p.m. Wednesday, Nov. 14, 2012.  There will be a parish rosary at 5 p.m. and a vigil prayer service at 7:30 p.m., all at St. Mary Catholic Church in Alton.  Services have been entrusted to the Fisch Funeral Home & Monument of Remsen.  Condolences may be sent online to www.fischfh.com.

Walter was born Sept. 9, 1950, at LeMars, IA, the son of Joseph and Judith (Streff) Hansen. He was raised in the Alton area and graduated from Spalding Catholic High School in 1968. He then entered the 185th Air National Guard at Sioux City, IA, and after completing six months duty, was employed at the Sioux City Airbase. After leaving the guard, he was self- employed as a carpenter, worked for Mid-Sioux Opportunity, Inc. at Remsen and then Advance Brands at Orange City, IA.

He was a member of St. Mary Catholic Church at Alton. He enjoyed helping on the family farm, attending auctions, fishing and boating and collecting antique tools. He was a supportive uncle, attending the various activities of nieces and nephews in the area.

Preceded by: his parents, 2 sisters, Shirley and Debbie both in infancy and a nephew, Raymond Hansen in infancy.

Memorials may be directed to Orange City Home Health and Hospice. 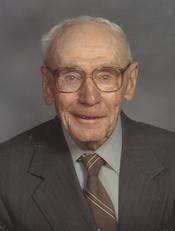 Burial will be at Trinity Lutheran Cemetery near Steen, MN.

In Lieu of flowers memorials may be directed to Peace Lutheran Church or charity of choice.

Louis Albert William Kitchenmaster was born April 4, 1917 in Allison Township, Lyon County, Iowa, the son of John and Emma (Lauck) Kitchenmaster. He was raised on the family farm near Steen, Minnesota and attended the Allison Township #2 school. He was baptized and confirmed at Trinity Lutheran Church, at Steen, MN. After his education he remained on the family farm helping with the daily operation. At the age of 24, Louis’s father suddenly died leaving Louis to assume the responsibility for the farm duties. He was a proud farmer working the land for several years. He retired in 1980 and moved to a home in Rock Rapids, IA.

Louis enjoyed playing cards, car rides through the country side, family gatherings and watching the Minnesota Twins. His family will remember Louis as a kind and gentle man. This past Sunday, November 11th Louis died at Rock Rapids Health Care Centre at the age of 95.

He is survived by his siblings, Florence Kitchenmaster, Nora Ranschau, Norman Kitchenmaster, all of Rock Rapids, IA; Doris (husband, Pete) Stegenga of Sioux Falls, SD; eight nieces and nephews; and other extended family.

Visitation will be held Thursday from 4-8PM, with the family present from 6-8PM at the Memorial Funeral Home of Sioux Center.

A funeral service will be held on Friday at 10AM at the First Christian Reformed Church with Rev. Mark Verbruggen officiating.  Interment will follow the service in Memory Gardens Cemetery of Sioux Center.

Condolences may be sent at www.MFHonline.com.

Funeral arrangements are pending at the Andringa Funeral Home in Sibley.